24/01/2020 - The first feature film by Mexico’s Fernanda Valadez is a very well-directed road movie, following a mother in search of her missing son who disappeared en route to the US

"Maybe my son is dead, but I have to know." Illegal economic migration from Mexico to the US, and the climate of extreme violence which reigns supreme south of the Rio Grande, has formed the focus of many films to date. But for her first feature film Identifying Features [+see also:
trailer
film profile], unveiled in the World Cinema Dramatic Competition of the 36th Sundance Film Festival, Fernanda Valadez has chosen a rather innovative angle; a human approach which nonetheless reflects the great abyss engulfing the entire country at the beginning of the 2010s. Tracing the stoic and persistent meanderings of a mother in search of her young son who vanished without a trace while making his way to the US with a friend in pursuit of the American dream, the film tackles with great accuracy- and in a simple and healthily discrete fashion, taking care to avoid excesses of melodrama- the terrible subject of human disappearances and the omnipresence of fear in a Mexican society that is struggling under the stranglehold of armed groups.

Written by the director herself alongside Astrid Rondero, the story is very well thought out and skilfully introduces secondary characters who cross paths with our protagonist Magdalena (Mercedes Hernández), a 48-year-old single mum living a sparse life in the State of Guanajuato, in a small house surrounded by a plot of land from which she watched her son Jesús (Juan Jesús Varela) and his friend Rigo disappear into the distance hoping to reach Arizona. Two months later, having received no news from them since their last phone call, made as they were about to get on a bus not far from the border, their mothers report their disappearance, at which point Federal police photos confirm Rigo is dead. Magdalena decides to go to the area herself and embarks upon a veritable odyssey, marked notably by two encounters. Firstly, that with middle-class woman Olivia (Ana Laura Rodríguez), in a centre where bodies are identified, who is also a mother to a missing son and who persuades Magdalena not to give up on her search, even if everything seems to point towards Jesús being dead (his bag was found amongst a number of dead bodies). Secondly, while Magdalena is making her way towards a rural community to meet a survivor of a bus attack, she randomly comes across Miguel (David Illescas), who is returning to his family home following expulsion from the US where he has been living for the past four years…

Sliding the situation under a microscope, Identifying Features moves constantly with its main character, slowly advancing (at a skilfully controlled pace) towards a landscape that’s increasingly wild, both literally and metaphorically. A seemingly simple though beautiful portrait of a woman of the people and a mother, of whom the slightest facial movements are followed closely by the camera, the film (which benefits from Claudia Becerril’s wonderful work at the helm of photography and from the musical expertise of Clarice Jensen) ultimately consists of several fine layers, which allow it to embrace the subject in all its depth, from individual yearnings to migrate, to the seedlings of trust and solidarity which emerge against a backdrop characterised by threats and things left unsaid. It’s a vast off-camera terrain which will eventually take a very physical form, and which speaks volumes of the boundaries of the human heart and of the undeniable qualities of this director, who should be watched with interest. 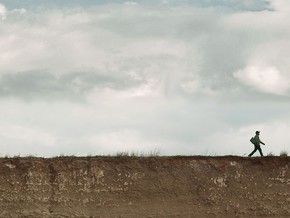