As in every year, the Max Ophüls Prize provided a panoramic view of some of the most promising young voices in German-language cinema. This 41st edition of the festival (running 20-27 January 2020) also welcomed the world premiere of the science-fiction film Live [+see also:
trailer
film profile], by Lisa Charlotte Friederich, the German actress and director best known for her acting performance in Gordian Maugg’s biopic Fritz Lang [+see also:
trailer
film profile]. Her first film offers up a dystopic vision of our society in a not-too-distant future, navigating threatening and fascinating atmospheres in more or less successful fashion.

The viewer mainly follows the story of a brother (Anton Spieker) and a sister (Karoline Marie Reinke), two passionate musicians who live in an austere world marked by excesses of violence. They’re part of an extremely individualistic generation which avoids human contact as far as is possible. These youngsters don’t know what it is to make love, to go to the supermarket or to spend time in busy public places. Because ultimately, whenever a group of people come together, a blood-drenched terrorist attack takes place. In the interests of public protection, group gatherings are now forbidden.

Stopgap methods have been put in place in order to respond to the population’s fundamental needs, but human relationships have changed irreversibly. For example, it is possible to attend a concert: you just have to wear a coat connected to the musician’s interactive glasses which gives the illusion of a concert hall full of people. But feeling the heat of another person’s body, or sharing emotions, is no longer an option.

This dialectic between the pros and cons of listening to a concert at home or live is central to the film. It’s the starting point from which the director portrays an act of rebellion against the established order and against the fatalism which has turned mistrust into an everyday norm. But this fatalism will gradually be rejected by this handful of rebels.

It could be argued that the director is looking to draw our attention to the growing distrust felt towards foreigners, as is presently the case in Germany and in other European countries, for example. Moving beyond this satiric metaphor, Friederich shows us that lives and daily routines which are deemed to be safe and protected in a physical sense can only lead to an overall loss without the intellectual and emotional stimulus provided by human interaction. Put more simply, Live could be considered an advocate for a way of life which seizes the moment and embraces "carpe-diem".

Regrettably, the film remains too enigmatic as regards its many intentions. The pace of the final act suddenly accelerates, ending on a philosophical note which seems somewhat irrelevant and is disappointingly unoriginal. The direction and set design are very well thought out, as are the costumes and props, but sadly, consistency and relevancy are often in short supply. No doubt intentionally, the atmosphere of Live is highly artificial, almost clinical, which adds a fascinating level to the film. But it also makes the characters less accessible. Is this a reference to the film’s theme or is it a paradox? The answer, much like the characters, isn’t entirely clear. 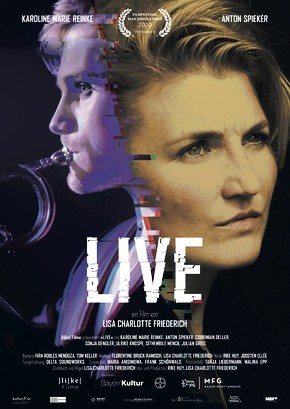