After a four-year absence, Solothurn Film Festival regular Sabine Boss is returning with her latest work Open Season [+see also:
trailer
film profile], which was presented in a world premiere and is in the running for the Prix de Soleure. Her films have always fixed their gaze on psychologically rich and complex characters who are both fragile and determined: Verdacht portrays a man with apparently nothing to hide, who is accused of sexual abuse, whilst I Am the Keeper [+see also:
film review
trailer
interview: Sabine Boss
film profile] speaks of Ernst, known as Goalie, a bon vivant and former convict who dreams of starting over. With her latest work Open Season, the Swiss director is taking on the cruel and ruthless world of business as seen through the eyes of Alexander Meier (Stefan Kurt), a frosty and mysterious financial officer.

The protagonist of Open Season is fighting tooth and nail for the survival of the Walser firm. A long-term employee of the company, Meier is conscientious and a perfectionist to the extreme. His family life, meanwhile, is slowly crumbling: an absent father and husband, Herr Meier can no longer reconcile work with home life. When the Walser firm decides to bring in an unscrupulous senior manager, Hans-Werner Brockmann (Ulrich Tukur), a power struggle ensues which pushes Meier to his farthest limits. Confronted with the meagre remnants of his existence and worn out from fighting a power-thirsty tyrant, Open Season’s lead character can only see one way of getting back at Brockmann.

What are the consequences of a life spent repressing our feelings? What does it mean to sacrifice our life in the name of a prosperous career? Sabine Boss contends with these uncomfortable questions in Open Season, pointing her lens at a ruthless world that’s intolerant of human error. The opening scene where the director observes her character from above, as if he were already no longer part of this world, speaks of the end which Meier will meet; his cruel and gradual decline. With precision and force, Stefan Kurt steps into the shoes of this frosty yet fragile character, who seems to crumble before our very eyes. His face, impassive and ultimately anonymous, transforms over the passage of time to become a grotesque mask, a shattered wall revealing a frozen inner world.

Boss succeeds in revealing the man hidden behind this frantic worker, the frailty buried beneath layer upon layer of indifference. The ultra-modern and obsessively well-organised apartment which Meier pretends he still lives in (he’s at a tricky stage in his divorce), his anonymous, soundless office, monochromatic to the point of paroxysm, and his perfectly starched suit, all seem to swallow him up, reducing him to the state of soulless automaton.

The director is talking to us about the cruelty of a world where performance is the only thing that counts. But first and foremost, she is talking about a man who has lost all points of reference: Alexander Meier doesn’t exist without his work; his position as “pack leader” (in the firm, but also in his private life) is endangered and, just like the animals he stalks in a virtual hunting game, he is no longer able to hide his true nature. His stereotypical masculinity turns into humanity, a fragility that’s visible to all, and this is the real issue in his eyes. A courageous film of great formal elegance, Open Season portrays a captain lost at sea who decides to abandon ship.

Set to take place in physical form, the industry platform of the Zurich Film Festival will investigate how events can continue to happen successfully during a pandemic 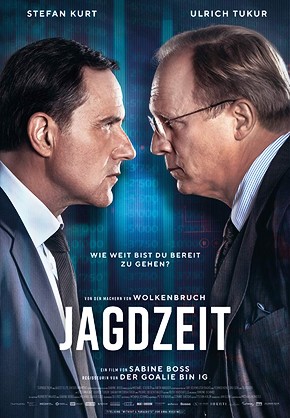