Diametrically opposed to the dominant Indian industry that is Bollywood, Karthick’s film is an artisanal, visually prodigious work, composed of a series of unforgettable close-ups, a product of meticulous artistic direction and Saumyananda Sahi’s excellent 4:3 photography. The film records the daily life of the titular Nasir, a humble worker in a clothes shop selling saris, and it does so by way of Bressonian shots of the movements made by his hands, his body and his ever-smiling face. In this way, the body of Nasir – played by the poetry translator, playwright and theatre director Koumarane Valavane – is tasked with providing us with all the information we need on a protagonist who doesn’t talk very much, as well as revealing the true conflict at the heart of this purely contemplative film.

Based upon Dilip Kumar’s A Clerk's Tale, Nasir denounces the irreparable effects of hate speech on human lives, in this particular instance the Muslim minority, as propagated by India’s current right-wing party which claims Hinduism to be the only legitimate religion in the country. The propaganda disseminated against the Muslim community by this xenophobic party, in the southern province of Tamil Nadu in particular, was the root cause of the violent, anti-Muslim protests which unfolded in the city of Coimbatore in September 2016, almost two decades on from the 1998 bomb attacks, which took place in the same city and for the very same reason.

In his second feature film, the Coimbatore-born director depicts a society marked by its religious differences which incites hate and leads its citizens to persecute their neighbours to death. Karthick portrays an intoxicated city and suggests the only guilty parties are the political parties in power. His exceptional film has as its protagonist a possible anonymous victim of these protests - demonstrations during which the Muslim ghetto was attacked daily in a bid to destroy shops, burn vehicles, or even kill innocent bystanders. 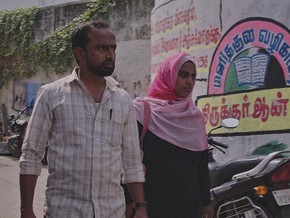