30/01/2020 - In Jenni Toivoniemi’s rather lovely debut, screening at Göteborg, who needs enemies if you have friends?

Already a part of the team behind last year’s anthology film Force of Habit, Jenni Toivoniemi makes her proper feature debut with Games People Play [+see also:
trailer
film profile], now fresh off its world premiere in the Göteborg Film Festival’s Nordic Competition. This timing is very fitting, as it sure does make a case for “dry January” – you can sense approaching disaster as soon as the first bottle is popped open.

It’s the first, but surely not the last, with the drinks flowing free in this story about a group of old friends reuniting for one summer weekend. The excuse, unlike their relationships, is quite simple: Mitzi (Emmi Parviainen) is about to turn 40 years old. But the thing is, she really doesn’t want a birthday party, her husband is gone and she has started smoking again. Surprise!

Of course, the set-up looks very familiar – at this point, anyone could take their pick of the countless Films About Friends Getting Together, for one reason or another, from The Big Chill to Peter’s Friends, the latter not even trying to hide it with that title. But Toivoniemi shows precisely why the concept is still so appealing, with the group dynamic changing just about every second, regardless of whether they are talking about social media or Chernobyl, playing “truth or karaoke”, or discovering that, after decades spent in close proximity, they still don’t know everything about each other. Or maybe they know nothing at all.

It’s all rather lovely, even if there are some things to nitpick about, like the shaky, handheld camera that frankly gets tiring – so tiring, in fact, that one gets the uncontrollable urge to tell the cinematographer to just sit the hell down. Also, not everyone gets a truly juicy part, with Paula Vesala as Mitzi’s ex’s current girlfriend somewhat distractingly styled like some mousy protagonist from a 1990s romantic comedy just before she takes off her glasses to reveal she has been stunning all along. But Toivoniemi smartly gathers together what could be seen as a “who’s who” of Finnish actors, with Laura Birn, Border [+see also:
film review
trailer
interview: Ali Abbasi
film profile]’s Eero Milonoff (this time sans prosthetics) and Samuli Niittymäki, clearly surviving the May-December sexual escapades he experienced in Ladies of Steel [+see also:
film review
trailer
interview: Pamela Tola
film profile]. And then she just lets them play.

And play they do, as the writing is often superb, and so are the insults, with “If only you had the vagina to face your emotions” easily emerging as the clear winner, and one to launch a thousand T-shirts in the near future. That being said, some jokes strike as more local, with Birn’s Veronika showing off her laughably perfect Swedish boyfriend known for being in some hot Viking show (Christian Hillborg, from The Last Kingdom – insert ironic comments here) as he visits his “former colony” and ends up getting ogled by dad-bodied Finnish companions, resignedly sipping their beers. Forget Swedes, though, as even Scorsese doesn’t walk away from this experience unscathed. “That monk movie was terrible. People were laughing in the cinemas,” goes someone’s rather justified take on Silence. Well. If only he had the vagina to face it.

Written by Jenni Toivoniemi, Games People Play was produced by Venla Hellstedt and Elli Toivoniemi for Finland’s Tuffi Films. Its sales are handled by LevelK.

In Jenni Toivoniemi’s rather lovely debut, screening at Göteborg, who needs enemies if you have friends? 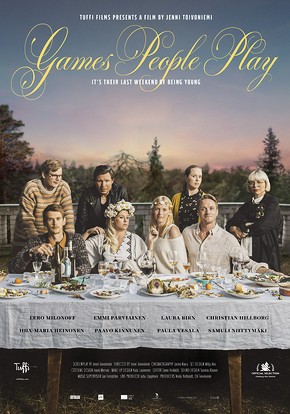 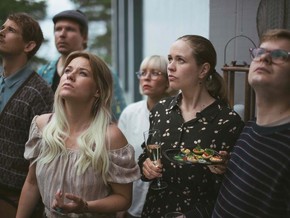