Minami and Johnny Depp in Minamata

Shown in the Berlinale Special Gala section of the 70th Berlin International Film Festival, Andrew Levitas’ Minamata [+see also:
trailer
film profile] is frankly anything but "special". Set in 1971 and based on a true story, it tries to show the many struggles of one W Eugene Smith (Johnny Depp), a celebrated war photographer trying his very best to gloomily drink himself to death, until an unexpected meeting with Japanese translator Aileen (Minami) changes it all. Aileen throws a bomb right into his lap – information about the so-called “Minamata disease”, named after a village where its inhabitants are suffering the terrible consequences of mercury poisoning. This is something that the Chisso Corporation, responsible for polluting their water supplies for years, has been steadily refusing to acknowledge.

It’s an important story, told in a very unfortunate film, with Levitas always choosing the more sentimental route when given the option, or a clichéd dialogue that plagues just about every exchange that Depp’s “Gene” happens to have with his long-suffering (what else?) editor, played by an understandably tired-looking Bill Nighy. While Depp, after a series of clunkers, at least gets something close to an actual role this time, it’s still not the best one. Sounding a tad Jack Sparrow-ish whenever there is a bottle around and lumbered with a glued-on Santa beard, he simply descends into the “unlikely hero” trope from the very first scene, boozing and developing photos in some crazed haze while listening to “I’d Love to Change the World”. Which, frankly, could already be considered a spoiler.

It’s easy to see what attracted him to the part, after allegedly having spent millions firing Hunter S Thompson’s ashes from a cannon – the man just loves a good rogue. But Smith’s sudden change of heart, conveniently streamlined to him proclaiming, “I am done” and advising Nighy to “lose these corny war photos” from his new issue, only to drop everything and fly to Japan some five minutes later, doesn’t really convince. Neither does his troubled backstory, exemplified here by some black-and-white flashbacks – rather appropriate, given Smith’s chosen aesthetic. But here is the problem: Levitas, while recreating his famous shots rather skilfully, doesn’t really add anything new. If anything, he just burdens them with tiresome scenes, delivered by the supporting over-actors.

While not quite Sean Penn’s The Last Face, which isn’t really saying a lot, Minamata is just another Clumsy Film About a Serious Subject – the likes of which are bound to pop up at just about every festival these days. Not to mention the fact that it’s a wasted opportunity to say something about the issues that have lost none of their importance and, if anything, have only become more pressing. And if, as it is said here, every photo steals not just the subject’s soul, but that of the photographer as well, this time around there is just no soul to steal. 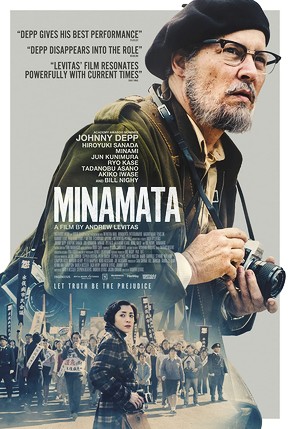