24/02/2020 - BERLINALE 2020: Patrick and Hugo Sobelman’s documentary proffers a testimony of inestimable human and historical value in memory of a woman who experienced a dramatically exceptional fate

Before us sits an 84-year-old grandmother, positioned in her Parisian lounge opposite the amateur camera of her grandson Patrick Sobelman. It’s 29 October 1994 and over the course of three days, this woman will tell her life story, picking out recollections as they come to her, reaching back, more or less accurately, into the deepest recesses of her memory, prompted by the man in front of her, whose only aim was to preserve a family trace of this woman’s extraordinary existence, from the years spent in her native Poland to her youth in Berlin; from life in occupied France to that in the camps of Auschwitz-Birkenau and Bergen-Belsen, before her eventual return to “normal” life in the French capital. It’s a dramatic saga which is as captivating as it is moving, and which, almost 25 years later, the one-time videographer (who has since become a seasoned producer) chose to turn into a feature-length documentary, co-directed with his son Hugo Sobelman and unveiled in a Special Screening at the 70th Berlinale: Golda Maria [+see also:
trailer
interview: Patrick Sobelman and Hugo S…
film profile].

"My mind was opened". The youngest of six children, nicknamed “the Nightingale” by her father, Golda reminisces about her youth, starting with her birth in 1910 in Kalisz, western Poland: she speaks of Dantzig and her departure by sea for Germany; her adolescence in Berlin; her first trip to Paris for the Exposition coloniale in 1931; the first Nazi threats aimed at Jews in 1933; exile and hunger in the French capital with some of her family (certain family members left for Palestine); her marriage to widower Pierre and her joy at giving birth to Simone and Robert. And then, darker days draw in once more with the census of Parisian Jews in 1941, the subsequent nomadic existence she led while on the run from the Germans in Marseille, Aurillac, La Bourboule and Aix-les-Bains, and her eventual arrest in the spring of 1944 while trying to travel to Switzerland illegally (where little Simone had been taken by her father previously). Golda was then deported (by way of Drancy) to Auschwitz-Birkenau, where her son Robert ("Mummy, where are you going?") and mother-in-law Frieda disappeared from view within minutes. What follows is a terrifying tale of survival (and a new nickname: "the Magistrate") which continues in Bergen-Belsen ("we walked over corpses", "we were animals") and then in Czechoslovakia, before her eventual liberation in Theresienstadt in April 1945. Next comes the story of her never-ending journey home to Paris (Golda weighed 38 kilos by this time) and her reunion with a family to whom she wouldn’t tell anything of her suffering ("it was impossible, they wouldn’t have believed us, we ourselves didn’t want to believe it").

Making skilful use of photos (mostly family ones) so as to illustrate Golda’s story while filming the protagonist in a static shot, the film, in all its penetrating simplicity, serves as an incredible testimonial, which inevitably elicits great emotion, but is also modest. We feel great tenderness towards this intelligent and dignified woman who knows how to silence her greatest sorrows without ever really hiding them, and how to share the love she feels for her mosaic of a family, whom the audience is getting to know. Obviously, the result is an edifying page of individual history and a wonderful homage. But the film’s greatest strength, without doubt, is Golda’s lively and spontaneous memory, which manages to revive episodes from the past which might almost seem anecdotal in the context of Golda’s tangled fate, but which are ultimately rendered sublime by their incredibly human dimension: a piece of bread, a sea of umbrellas on a quay, a word which saves a life… A humble and mighty heroine of the 20th century, Golda Maria passed away in December 2010 at the age of 102.

“This story is bigger than our family”

BERLINALE 2020: We spoke to Patrick and Hugo Sobelman about their Golda Maria, which brings together three generations

BERLINALE 2020: Patrick and Hugo Sobelman’s documentary proffers a testimony of inestimable human and historical value in memory of a woman who experienced a dramatically exceptional fate 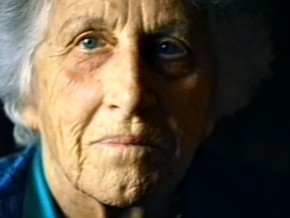