“Iranians abroad” could easily be its own little subgenre, with a number of sources of conflict in store along the way. Such predicaments are ubiquitous in Pari [+see also:
trailer
interview: Siamak Etemadi
film profile], the debut feature by Iranian-born, Athens-based Siamak Etemadi, which has world-premiered in the Panorama section of the 70th Berlinale.

“Unfortunately, our young people often lose their way here because of all the freedoms – their so-called freedoms,” Farrokh and his wife, Pari, are told at the Iranian consulate in Athens. The couple are in town to visit their son, Babak, who came here two years ago via a scholarship for the Polytechnic University. Now, he’s vanished into thin air, not showing up at the airport and absent from his flat for the last three months (with the rent left unpaid, at that). As for the scholarship, it came to an end a year ago.

Farrokh is seething with rage. Here he is, in a “God-forsaken” country without any language to communicate in, bitterly regretting letting his wife talk him into letting Babak go in the first place. “You filled his head with fairy tales,” he chastises her. Disgrace, humiliation, dishonour – Farrokh feels it all, rubbed into his face.

Pari, while deeply concerned, has trust in a reason for Babak’s disappearance. The couple get a hotel room and begin their search. The consulate advises them to look in Christian churches, where some Muslims convert in order to seek asylum. Here, an Iranian woman, bare-headed and smiling, offers Farrokh and Pari any help she can. Farrokh looks appalled. What’s more, no one knows Babak here either.

Pari is first and foremost about the title character, her history and the journey that lies ahead of her. Little by little, the story unveils yet another side of a complex woman, who is well worth getting to know. Her knowledge of English (accordingly frowned upon by Farrokh) is of help during the search, not least through some scribbled notes that Pari has taken along with her from Babak’s abandoned flat. A circled “A” leads her to Athens’ Exarcheia area, where further conflicts are very much in store, as Pari winds up in a riot attended by the police and her outer garment, her chādor, catches fire and will have to be sacrificed.

Indeed, several sacrifices will be necessary during Pari’s pursuit, on a road roamed by heretics, anarchists, prostitutes and possibly a demonic guardian angel in the shape of a wolf-like Alsatian. Writer-director Etemadi lays it on quite thick at times, but with compelling payoffs. The unflinching main performance by Melika Foroutan is worth the price of admission alone. The reoccurring quotes from 13th-century Sufi poet Rumi hint not only at rebirth, but also at the dreams and choices of both Babak and his mother. 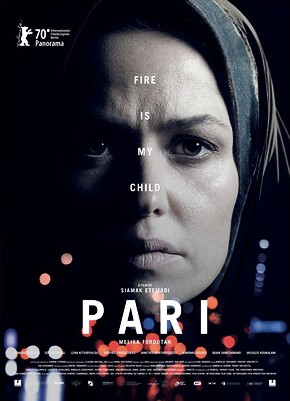 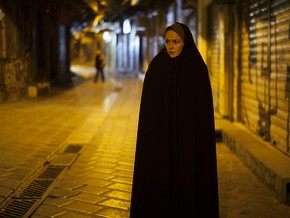