Review: The Metamorphosis of Birds

29/02/2020 - BERLINALE 2020: Catarina Vasconcelos’ first feature is a visual ode to the beauty of the relentless cycle of life (and death)

Manuel Rosa in The Metamorphosis of Birds

Water, trees, birds: this simple order could easily describe the process through which certain elements appeared – or were created – on Earth. That’s how life began, and these are the natural pillars of Catarina Vasconcelos’ first feature, The Metamorphosis of Birds [+see also:
trailer
interview: Catarina Vasconcelos
film profile], screening in Encounters at the 70th Berlinale. It’s a deeply personal film that could be labelled as an autobiography, even though it is a clear hybrid between fiction and documentary. Through a beautifully composed movie, we see the foundations and the life of the director’s family – foundations that have been broken, damaged and scarred by the death of the trees that once gave the birds a place where they belonged and a chance to grow, by granting them a solid surface closer to the skies, from where they could learn how to fly. It’s a place that disappeared when two people died: Catarina’s grandmother, Beatriz, and Catarina’s mother.

“Triz” is the first word we hear (after some deep, loud breaths): this name, this presence, will resonate throughout the film. Catarina’s grandfather is the first visual element in this feature: his eyes are the first image we see. They give us a glimpse of a person who was constantly lost at sea, away from his family, his wife and their everyday lives. But in this film, he’s not alone: he’s one of several sets of tones, voices and perspectives. The narrator shifts between his voice and the ones that are (or were) on dry land, in the past as well as in the present. We listen to and get to know Beatriz, Jacinto (Catarina’s father) and Catarina herself. The voices, as well as the ideas and thoughts presented, may not be those of the genuine characters in real life, but this has something to do with the overarching strategy of the movie: it’s a visual and conceptual adaptation of reality, where we can grasp it in a subtle but meaningful way, through the portrayal of the energy and warmth that these people and these characters emanated in real life.

This hybrid strategy, and this separation of real life and film, of documentary and fiction, can also be felt in the visual composition. In a film that explores loss, grief, life, death, happiness and sorrow, where emotions could easily run riot visually speaking, the images actually end up taking us to a quiet, controlled space, where everything is methodically placed in front of the camera – where everything is carefully orchestrated to allow us to dive into the beauty of the elements, as if the film itself were a series of still-life paintings. And when death comes, we inevitably become observers of the theatre of the absurd, in which the characters’ lives seem to carry on, but devoid of the same meaning.

This two-part work delves deeper into the director’s own experience with loss, developing from an attempt to better get to know her grandmother into an essay about her relationship with her own father, after the loss of her mother. There’s an overall theme of “motherless” families, with glimpses of Portuguese cultural memory from the middle of the 20th century (talking about Salazar, the colonies, war, and even a woman’s place in society) up until the present day. But the main core of the film ends up being a love letter to the people who have ever existed on Earth and who, by being trees, the main pillar of our existence, have allowed us to fly. It’s an eternal process of metamorphosis, a never-ending cycle of dying and giving birth: a love that prevails amidst the sheer beauty of life.

The Metamorphosis of Birds was produced by Portugal’s Primeira Idade.

more about: The Metamorphosis of Birds

Interview: Catarina Vasconcelos • Director of The Metamorphosis of Birds

Review: The Metamorphosis of Birds

BERLINALE 2020: Catarina Vasconcelos’ first feature is a visual ode to the beauty of the relentless cycle of life (and death) 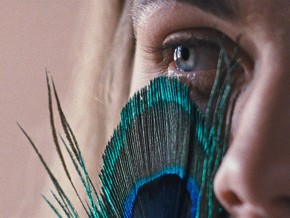