04/03/2020 - Lambert Wilson plays the general in Gabriel Le Bomin's film, set at the beginning of WWII, mixing the historic and the romanesque and charting a military debacle as well as the revelation of a destiny

This transformative interpretation (which will probably have its fans and its critics, considering the iconic dimension of De Gaulle’s figure in France) is the most interesting aspect of this film, which attempts to mix the great (and interesting) History of the last few weeks of collapse of the French army up to the “Appeal of 18 June” calling for resistance, with the romantic (and much more conventional) portrait of a couple and a family without bearings on the roads of exile.

“A victory is also a way of thinking, a desire to win.” On the front, on 28 May 1948 in Abbeville, the colonel de Gaulle sees his theoretical predictions come true: the mechanical force of armoured vehicles and bombings prevail, but at the expense of France, dramatically knocked back by the German advance. Called back to Paris and made General, de Gaulle is named Deputy Secretary of State by Counsel President Paul Reynaud (Olivier Gourmet) with the support of Internal Affairs minister Georges Mandel (Gilles Cohen). His belief that the conflict will be worldwide and that French forces must continue the fight from their colonies is immediately opposed by Marshal Pétain (Philippe Laudenbach) and the General Weygand (Alain Lenglet) who are calling for an armistice, though not without ulterior motives (to take the control back from the politicians and “settle things with this damned Republic,” all of it with distinct hints of antisemitism). Going back and forth between London and Paris to negotiate with Churchill (Tim Hudson) while the French government flees to Bordeaux, the ambitious de Gaulle soon finds himself faced with a choice that is very risky for a military man like himself: to disobey orders alone and plunge into the unknown, in the interest of salvaging his own conception of France’s moral stature. Meanwhile, the general is also worried about his family, his wife Yvonne (Isabelle Carré) and their three children Philippe (Félix Back), Élisabeth (Lucie Rouxel) and the young Anne (Clémence Hittin) with Down Syndrome, travelling on the roads of France with their governess (Catherine Mouchet).

The attempt by Gabriel Le Bomin (who wrote the script together with Valérie Ranson-Enguiale) to work on both historical and personal levels is not as good an idea as it initially appears, as it dilutes the potential of a film whose political facet is rather instructive and fascinating, documenting a series of dramatic events unfolding at great speed. And while Lambert Wilson offers a perfectly credible version of de Gaulle, well supported by all the surrounding performers in military and governmental roles, the fleeing of the hero’s family feels cliched and cheap (despite good performances) and distances the film from the efficiency of the model of the American biopic.

Lambert Wilson plays the general in Gabriel Le Bomin's film, set at the beginning of WWII, mixing the historic and the romanesque and charting a military debacle as well as the revelation of a destiny 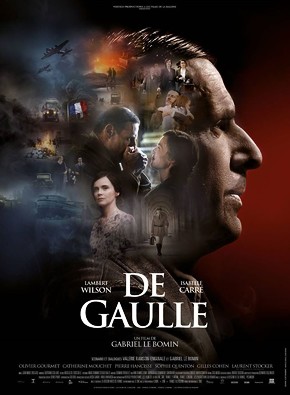