05/03/2020 - BERLINALE 2020: The winner of the Heiner Carow Prize at the Berlinale, Natalija Yefimkina's first feature-length documentary explores the phenomenon of garage settlements in the Russian North

The first feature-length documentary by Kiev-born, Berlin-based filmmaker Natalija Yefimkina, Garage People [+see also:
trailer
film profile], world-premiered in the 70th Berlinale's Perspektive Deutsches Kino, where it received the Heiner Carow Prize for the promotion of the German cinematic arts. This mosaic-like documentary explores the phenomenon of garage settlements in the Russian North.

Completely lacking in exposition, the film is set on the Kola Peninsula in the Murmansk region, beyond the Arctic Circle, which we can deduce from an early segment in which a radio enthusiast sends a message out on air, citing his location. He is sitting inside one of the long lines of garages, basically brick huts with tin roofs, where the inhabitants of this mining region, mostly men, have found a refuge to indulge in their passions and hobbies, but also for their businesses. Either working in the mines or retired from this profession, they live in apartment blocks in the town and spend a lot of time in these private spaces, away from their wives, who, as we see in a couple of scenes, are the real heads of the households.

Yefimkina follows several protagonists: Vitalik and Ilja K are friends in their thirties who collect, adapt and sell scrap metal; an older gentleman called Pavel carves religious icons in wood; middle-aged Roman breeds quails and chickens; Sergei is struggling with the advance of Parkinson's disease, but this doesn't stop him from fixing every little mechanical thing that anyone needs mending; young Ilja L, along with his friend (or brother?) John, has turned his garage into a rehearsal room for rock bands; and the oldest of them all, Viktor, has over the decades built four floors under his hut, all by himself, using only a shovel and a bucket. There are also a couple of strange men who seem to be doing World War II role-playing – it is hard to tell which army their uniforms belong to, but they are definitely not modern, just like their rifles and machine gun.

The men live and behave as we would, stereotypically, expect Russian men to, to an extent: they drink a lot, (mis)quote the Bible, and engage in long conversations and, sometimes, physical fights. But in this purely observational documentary, Yefimkina has, through the selection of scenes and the way they are put together, decided to show their more soulful sides and the fact that they have hopes and dreams, especially the younger ones. For instance, Vitalik and Ilja K keep quarrelling, but they can't really do without each other; the singer of one band wants to open her own metal bar in Sweden and brew beers with heavy-metal names; and Ilja L actually writes some pretty decent poetry.

In one of the scenes, this poetry, read with his voice-over, is used against a brief shot of his descent into the mine. In another, a priest comes to Pavel to commission an icon (for which he will not necessarily pay) for the new church that’s being built. For the protagonists, the "real world" seems to be situated somewhere on the fringes of the garage settlement, which cannot exist without it, but which plays by its own rules.

Garage People is an engaging and lively documentary with a well-measured dose of humour. Yefimkina makes sure that, despite the dirty, industrial setting of cluttered spaces full of rusty objects and all kinds of junk, and the magnificent but harsh natural surroundings, the viewer gets to see the heroes as everyday men with their own passions and quirks – which are certainly easy for many audiences to relate to.

Garage People is a German production staged by Hamburg-based Tamtam Film, in co-production with MDR and ARTE, and Berlin-based Rise and Shine handles the international rights.

BERLINALE 2020: The winner of the Heiner Carow Prize at the Berlinale, Natalija Yefimkina's first feature-length documentary explores the phenomenon of garage settlements in the Russian North 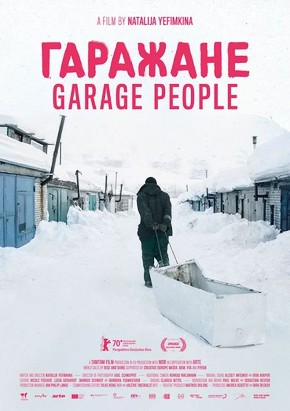