Review: Tune into the Future

17/03/2020 - This fascinating documentary presented at the Luxembourg City Film Festival takes a look at visionary Hugo Gernsback, the man who laid the foundations of modern sci-fi

The creator of various exhibitions and workshops at Luxembourg’s National Natural History Museum, but also a visual artist, Éric Schockmel is fascinated by new technologies and science-fiction. This is evident from his video installation Macrostructure, which was revealed in 2014 in the cellars of the Casino Luxembourg Modern Art Fair, and which enabled the young artist to build a certain reputation for himself. His 3D animated short films explore a world in which complex machines create organic structures that eventually become independent.

It should therefore come as no surprise that the universe created by Éric Schockmel has been compared several times to that of Hugo Gernsback. This eccentric Luxembourgish publisher who passed away in 1967 at the age of 83 is none other than the inventor of the term "science-fiction" and remains an immense source of collective inspiration to this day. Now, a documentary called Tune into the Future [+see also:
trailer
film profile], which was recently screened at the Luxembourg City Film Festival, tells his life story.

The film shines the spotlight on this forgotten and often misunderstood man. For Schockmel, Gernsback is a "fascinating figure who managed to build a bridge between cultures and time, thus opening a window to the future".

This undertaking soon turned out to be an arduous one: paradoxically, the legendary man left very few traces of his personal lifeand hardly any autobiographical writings that the helmer could rely on as he told his unusual story. With the help of Paul Lesch, the director of the National Audiovisual Centre and co-curator of the 2010 exhibition Hugo Gernsback – An Amazing Story, among other individuals, Éric Schockmel engrossed himself in a lengthy research process that lasted almost seven years. In the USA, where Gernsback lived for most of his life, the director met his descendents and several academics: this has resulted in some particularly gripping interviews that are scattered throughout the documentary.

In this way, the director sketches out the extraordinary journey of a man who was once an inventor and had nearly 80 patents to his name by the end of his life. The story starts off in his native Luxembourg, where his passion for scientific inventions was first ignited, later jumping to New York, where Gernsback settled in 1904 and started publishing Modern Electrics, one of the first magazines dedicated to the popularisation of science. After this, from 1920-1953, the entrepreneur published ever more creative periodicals, thus allowing numerous sci-fi authors to take their baby steps by publishing texts and illustrations in some of his publications, such as Amazing Stories, Science Wonder Stories and Superworld Comics.

But this man is also considered something of a pioneer in social networks, and that’s because he created a vast community of young, aspiring authors and managed to maintain itover the course of three decades. He constantly encouraged them to ask questions about the world of tomorrow and to develop new technologies.

In this enthusiastic and colourful documentary, the immense legacy of this visionary is partly celebrated through some superb animated sequences. These have been crafted by Studio 352, where the team consisting of Stéphan Roelants and Fabien Renelli worked using the front covers of Gernsback’s old magazines as a basis. In this way, the planets that were featured on the covers of Amazing Stories in 1926 come to life. All of a sudden, this man dressed in overalls that allow him to fly (with this even having inspired the creators of Superman) comes alive and meets other characters hailing from the zany universe of Hugo Gernsback.

The result of all this is an exciting tale about a publisher who, without being an actual novelist like Jules Verne or HG Wells, simply laid the foundations of modern science-fiction as a major driving force of cultural influence –to such an extent that the documentary informs us that a distant crateron the Moon has been named after Gernsback.

The playful and thrilling Tune into the Future was produced by Bernard Michaux (Samsa Film), in conjunction with Benoit Roland (Wrong Men).

more about: Tune into the Future

Review: Tune into the Future

This fascinating documentary presented at the Luxembourg City Film Festival takes a look at visionary Hugo Gernsback, the man who laid the foundations of modern sci-fi 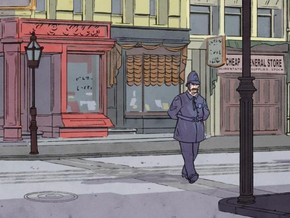 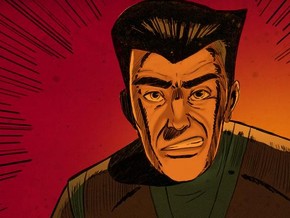 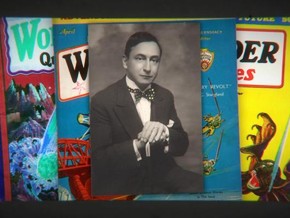