Review: A Girl From Mogadishu

Aja Naomi King in A Girl From Mogadishu

Ifrah is a 15-year-old girl living in Mogadishu, the Somalian capital, which at this particular point in time (2006) is ravaged by civil war. She’s lived in a violent environment ever since childhood, but when the situation worsens, Ifrah’s family decide to send her to live with her aunt in the US. With the dubious help of a slightly dodgy smuggler, Ifrah actually ends up in Dublin, Ireland. Lost, illiterate and not speaking a word of English, Ifrah must try to find her feet in this new and unfamiliar world. It’s at this point that the film opens a window onto the conditions which asylum seekers are forced to endure, and this in the very best of cases, when welcomed with open arms. Upon her arrival, Ifrah must undergo a medical examination and the reality of this additional ordeal, where she finds herself having to explain the physical and psychological violence she has endured to complete strangers, will cause the incomprehension and pain of her past to resurface. With the help of the staff at the asylum seeker centre and a group of young women in a similar situation, Ifrah slowly but surely finds her bearings, not only turning the fight against genital mutilation into her own personal battle, but also her greatest strength. Her fight will take her as far as the Irish President, the European Parliament and, finally, the UN.

Genital mutilation is the overriding theme in A Girl from Mogadishu, a film which was screened in the International Competition of the 35th Mons Film Festival and which follows the path taken by the activist Ifrah Ahmed, who is now known worldwide as one of the most powerful voices speaking out against the scourge of female genital mutilation. She’s one of the first ever women to have spoken publicly about the atrocities of female circumcision and its practice. In Somalia, it’s currently estimated that some 98% of women were circumcised as children.

Certain viewers will recognise Aja Naomi King - the young actress who dons the robes of the film’s main character - for her recurrent role in the series How To Get Away With Murder. As for other recognisable faces, Somalian actor Barkhad Abdi, known for his performance in Captain Philipps, also enjoys a small role, as does Martha Canga Antonio, the young Belgian actress from Black [+see also:
film review
trailer
interview: Adil El Arbi and Bilall Fal…
interview: Martha Canga Antonio
film profile]. The part of Ifrah’s grandmother, meanwhile, is played by the much-respected Somalian singer and composer Maryam Mursal.

Irish director Mary McGuckian is also the author of the screenplay, and has been writing, producing and directing independent feature films for some twenty or so years. She’s known for her militancy in the name of equal opportunities in the film industry and is committed to telling dramatic stories from a female viewpoint.

Despite its highly classic form and its omnipresent if not slightly overbearing soundtrack, the film’s primary aim is to inform and, in this respect, it fulfils its purpose. A Girl From Mogadishu seeks to mobilise, and to focus attention around a subject that is still seen as too taboo in these modern-day times. It succeeds at raising awareness, not only over the gravity of the situation, but also the suffering endured by the women concerned. Ifrah Ahmed has now returned to Somalia, from where she continues to fight her battle.

A Girl From Mogadishu is produced by Pembridge (Ireland), Umedia (Belgium) and Dune Film Productions (Morocco), whilst international sales are in the hands of The Exchange (US).

more about: A Girl from Mogadishu

Review: A Girl From Mogadishu

The cameras are rolling for TV series The South Westerlies

Irish Film Board funds a raft of projects 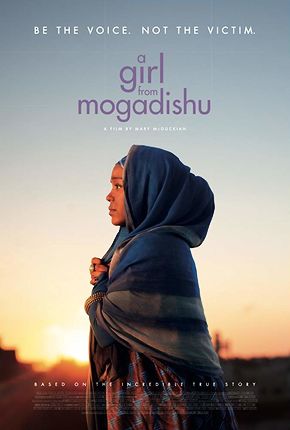