Review: The Fight for Greenland

19/03/2020 - Originally set to open this year’s edition of CPH:DOX, now unspooling online owing to the pandemic, Kenneth Sorento’s film takes a closer look at what could Make Greenland Great Again

Detailing the troubled current – and past – situation in Greenland, the world’s largest island, which went from being perceived as a snowbound wasteland to, yes, something Trump actually wanted to buy at one point, Kenneth Sorento’s The Fight for Greenland [+see also:
trailer
film profile] (presented in CPH:DOX’s main competition) certainly does a good job of trying to accommodate many differing points of views. They are expressed here, loud and clear, by its four protagonists, all young Greenlanders with their eyes set on change. But just how they want to achieve it is another matter.

Sorento seems determined to show another side of the place that, for the most part, is still viewed as somehow mythical, starting with the ice cracking and the bass pounding – both teasing the arrival of local rapper Josef. His verses are all about Greenland’s problematic heritage and its connection to Denmark, where “if you don’t speak Danish, you can’t get an education” and where his community is seen as a bunch of “worthless alcoholics”. In that sense, Josef’s activism resonates nicely with the recent Berlinale offering Mogul Mowgli [+see also:
film review
trailer
interview: Bassam Tariq
film profile], in which Riz Ahmed also tried to put his British-Pakistani roots into perspective while on stage. However, once the beat stops, it is up to aspiring politicians to fill in the gaps, which, although informative, also makes the film a tad lacking artistically.

As debates about independence and what it could actually entail, as well as the advantages of remaining a part of the Kingdom of Denmark, grow increasingly heated, The Fight for Greenland makes one thing clear: a revolution is needed. Also because its protagonists, while truly invested in celebrating their background – be it by getting a traditional face tattoo or addressing future voters in Greenlandic – are also capable of pointing out what is wrong. “There is something special about us Greenlanders,” observes one of them. “But it’s as if we have lost all self-respect.” And an ability to communicate, it seems, as the innate feeling of inferiority, strengthened by years of abuse and neglect, proves incredibly hard to shake off.

With the community that divided, it’s not an easy feat – especially as the constant fight between old and new sometimes provides people with an identity and sometimes appears to be holding them back. Unfortunately, Sorento has a knack for sentimentality, not helped by the dramatic score sweeping in every once in a while, and looks lost when dealing with the more emotionally charged moments. But his film’s message, stressing that people should just learn to help each other, couldn’t be timelier during these days of social distancing, and ultimately, it’s an earnest effort – even though, somehow in sync with its setting, creatively it leaves you rather cold. Ironically, perhaps, as no matter the place, aspiring female politicians are still being told to appear “warmer”.

The Fight for Greenland was produced by Ulrik Gutkin for Copenhagen Film Company Short & Doc. Its international sales are handled by DR Sales.

more about: The Fight for Greenland

The two organisations will earmark about €4.5 million to support the local audiovisual industry

Review: The Fight for Greenland

Originally set to open this year’s edition of CPH:DOX, now unspooling online owing to the pandemic, Kenneth Sorento’s film takes a closer look at what could Make Greenland Great Again 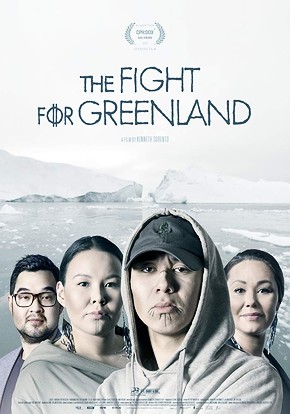