26/03/2020 - And the ship sails on in Jerzy Sladkowski’s disarming film, even without Fellini’s rhinoceros

World-premiering in CPH:DOX’s main competition, Jerzy Sladkowski’s Bitter Love [+see also:
trailer
film profile] starts by promising an awful lot: new friends, “new partners in love” and plenty of balloons. All, and much more, apparently to be found on board a Russian cruise ship called Maxim Gorky, of all things, and about to head down the Volga River. It might be precisely these promises that lure in its excited passengers, clearly more interested in finally figuring out their lives than enjoying a simple holiday, jumping into new relationships as soon as the cabins are open.

It’s hard not to think about Marek Piwowski’s 1970 movie The Cruise, a true phenomenon of a film in its native Poland, but for all its occasional outdoor stretching, Bitter Love is more melancholic – a pensive alcoholic to that merry tippler. With its tiny catastrophes set to the ardent notes played by an in-house pianist, focused more on his work than his singer girlfriend, it feels a bit old-fashioned sometimes. Or at least frozen in time, as years have gone by and women still stubbornly wear their hair the same way – appropriately, perhaps, given that on this deck, the much longed-for change comes around slowly, if at all. Even when their only wish is for “a man who knows how much sugar you put in your coffee.” No sugar – just black.

Most interactions play out in small groups, or just between two equally lost people, feeling just as staged in front of the camera as they do later on, proudly re-enacted for the gossipy entertainment of fellow travellers. The passengers observe the lucky ones, eager to parade around a new paramour, however short-lived the connection might prove to be, or share just about everything with a cabin-mate they’ve only just met. The term “small-scale drama” gets a whole new meaning when your lodging feels like an actual sardine can, but Sladkowski doesn’t mind the limited space. Quite the opposite, in fact: he gingerly eavesdrops on a fortune teller – a handy presence if one wants to finally get rid of that life-long curse – or only encourages ongoing squabbles with his presence, like the one between a long-time couple, about to finally tie the knot yet unable to work out a certain “beard” situation. As they say, sometimes you need more than just a trim.

The journey only gets more wistful from there on in, with more singing, more drinking and more drama captured up close and personal, with Sladkowski looking away only to sneak a peek through the smudged glass of a porthole, accompanied by that relentless pianist and a sinking realisation that time is running out, and daily existences have not been altered. This lack of any significant development is a frustrating – granted – but also very telling part of the film, as for the most part, hope can’t make you forget all past disappointments, it seems. And the ship sails on.

Bitter Love was produced by Antonio Russo Merenda, of Sweden’s Ginestra Film (also responsible for the sales), Ulla Simonen, of Finland’s Made, and Lucyna Kowalska, of Poland’s Ragusa Film.

And the ship sails on in Jerzy Sladkowski’s disarming film, even without Fellini’s rhinoceros 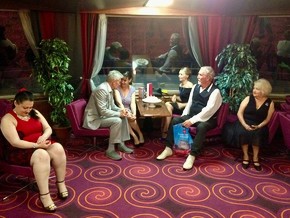