26/03/2020 - Joshua Bonnetta puts his name to an atmospheric and ethnographic documentary about the endurance of Gaelic culture in The Hebrides, which links the earthly world to the hereafter

A perilous and inexplicable whirlpool, fleeting glimmers of light which speak of tragedies, the appearance of strangers in the dead of night, symbolic visions, foreign voices emerging as if from nowhere, a spinning diving compass in a village consumed by water, indefinable sounds which hint at a fire, a woman hounded by terrible events in the wake of her husband’s suicide, the moving connection felt by a dying whale for ultrasonic waves, thumps made by an intangible entity trying to establish dialogue… On the Scottish Outer Hebrides islands, there’s no shortage of strange stories linking the earthly world to another; stories fuelled by a long tradition of Gaelic culture passed down orally, from generation to generation, but also, and most importantly, by the fact that the gift of divination is allegedly potent in this place; here, where the immensity of the sea and sky meets that of the vast majestic landscapes, and where nature’s power is omnipresent. Such is the intriguing subject-matter and impressive decor explored by Canadian filmmaker Joshua Bonnetta who set up residence on the islands with his microphone and camera in order to produce The Two Sights [+see also:
trailer
film profile], a film screened in the International Competition of the 42nd Cinéma du réel Festival (which unspooled online up until 22 March and whose winners are set to be revealed today) following its world premiere in the Berlinale Forum.

Using recordings of a dozen or so locals who, between 2017 and 2019, had told him some very unusual tales (mostly tales of misadventures they’d heard from their ancestors) on the islands of Barra, Berneray, Harris, Lewis and North Uist, the director patiently crafts a film resembling a cloth composed of suggestive motifs and pierced through with holes, which viewers can try to fill and think out, if they so wish, or else leave alone, allowing themselves to be carried away by a quietly sophisticated visual and aural tide.

An abundance of animals (from deer through to birds), sheer cliffs, rain beating down on the water’s skin, radio cracklings, waves crashing onto rocks, deserted heaths and imposing hills, lighthouse beacons piercing through the darkness, minuscule silhouettes of humans or of boats in vast surrounds, desolate dwellings, prints in the sand… The filmmaker offers up a meticulous and highly creative exploration, a geographic and atmospheric peregrination around these islands where the invisible has shone through over time. Like a flautist, the director (who also edited the film and composed its score) brings together a multitude of disparate elements (including symbolic illustrations and "reconstructions" of the tales) to compose a highly personal melody, chiming with the mystery inherent to beliefs and premonitions.

A demanding documentary, The Two Sights is itself the product of various worlds, having one foot in the experimental camp (especially as regards the film’s superb sound) and the other in the highly realistic portrayal of the landscape of these islands which are known as "The Thin Place", namely because, according to popular belief, there is, in this place, a very narrow distance between Paradise and Earth, and between life and death. It’s a hybrid offering through which Bonnetta creates a cinematic trace of what he sees, helping to perpetuate these local traditions which encourage us to "inhabit the temple of our hearts in the midst of a myriad of mountains".

The Two Sights was produced as part of the artist in residency initiative organised by the Taigh Chearsabhagh Museum & Arts Center and UistFilm (Andy MacKinnon), with the support of the Canada Council For The Arts.

more about: The Two Sights

Joshua Bonnetta puts his name to an atmospheric and ethnographic documentary about the endurance of Gaelic culture in The Hebrides, which links the earthly world to the hereafter 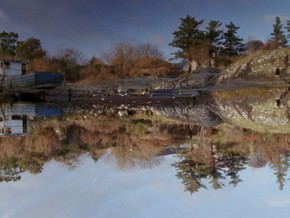 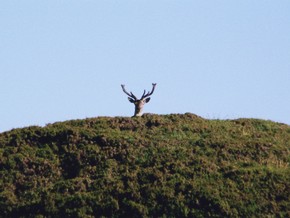 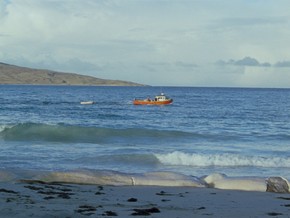