Doğaç Yıldız in The Lawyer

Lithuanian helmer and LGBT+ activist Romas Zabarauskas’ third feature, The Lawyer [+see also:
trailer
film profile], was scheduled to be world-premiered at London’s BFI Flare last week, following its presentation at Berlin’s European Film Market in February. Its official release, however, has been postponed after the event went fully virtual owing to the coronavirus pandemic. Nonetheless, we had the chance to preview Zabarauskas’ new directorial effort. The young filmmaker’s previous works (We Will Riot, You Can’t Escape Lithuania and his debut short, Porno Melodrama) tackled the subjects of queer love and have been shown on the European festival circuit, garnering much acclaim.

The story of The Lawyer, penned by the director himself, revolves around Marius, a corporate lawyer living in Vilnius (played by Eimutis Kvosciauskas), who spends his days teasing friends and chasing young lovers. The death of Marius’s estranged father shakes the protagonist, who finds himself striking up an unexpected relationship with a sex-cam worker, Ali (Turkish thesp Doğaç Yıldız), a Syrian man stuck in the Krnjaca refugee camp in Belgrade. The film opens with a day in the life of Marius, a wealthy professional who enjoys comfort, a fancy lifestyle and good company. After hosting a dinner party for some of his friends, he turns on his laptop and starts video-chatting with the other main character of the film, Ali. That encounter marks the beginning of their painful romance.

The acting by the two leads is solid, believable and incredibly delicate. It is perhaps the best quality of Zabarauskas’ film, along with an engaging script and excellent direction that moulds a unique atmosphere, full of melancholy and fragility. The mise-en-scène is always neat, almost minimalistic, and effectively stylises the main focus of the film – namely, the troubled love story between Ali and Marius. Throughout the movie, the world around the two lovers acts both as a backdrop and as an obstacle. Gradually, it becomes a metaphor for their isolation and marginalisation in a time and a place (today’s Serbia) where “being different” is still problematic.

Often, the director chooses to stage moments of intimacy with eloquent silences and minimal dialogue; this is definitely an apt choice that enriches the narration and prevents the film from treading more obvious paths. Moreover, the feature’s elegant score (courtesy of composer Ieva Marija Baranauskaite) and cinematography (lensed by DoP Narvydas Naujalis) contribute to enhancing the intimate, poetic dimension of the romance.

On the whole, the movie, with its superb directing choices, succeeds in telling a new, interesting story about diversity while steering clear of any rhetorical trappings. Zabarauskas’ drama bodes well for the future of contemporary Lithuanian cinema.

The Lawyer was produced by the director himself for Lithuanian firm Naratyvas. French outfit Wide Management is currently handling its world sales.

more about: The Lawyer

With its first-ever film in the Berlinale Shorts competition, a co-production in Generation and four movies getting market screenings, the Baltic country is revving its engines for Berlin

EXCLUSIVE: Poster and trailer for The Lawyer 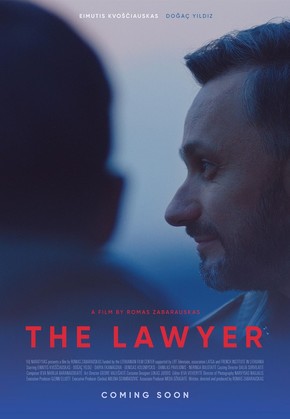