Amor Fati is one of those films which hypnotises the viewer with the beauty of its images and its high-precision editing, which lends the film an “other”, hidden, mysterious meaning. Like many little haiku poems gathered together in a single volume, the various sequences making up the film test our ability to follow a story which, at first glance, seems incomprehensible, albeit highly seductive. Varejão holds our hands, presenting us with a series of characters who all share a certain unique sensibility. This apparent foresight of theirs is born out of their meeting with their “better half”, the half which completes them and helps them to at last feel anchored to the world as they perceive it.

Obviously, the film moves beyond clichés and doesn’t content itself with exploring the union of a “classic” couple: in love and heterosexual. On the contrary, it opens the viewer’s eyes to a far wider series of possibilities: a couple of boys/girls who defy gender conventions, a mother and her daughters, two elderly women in a village, a blind boy and his mother, but also a musician and his student (he too also hailing from a musical family), a musician and his instrument, not to mention a drag artist and his puppy, a falconer and his bird, some sort of holy hermit and his horse, and the unforgettable twins (a sibling relationship which is unfortunately treated to a highly caricatural depiction – for the umpteenth time in film - despite there being decidedly more interesting elements to explore on this topic).

What unites all these couples is a force of attraction that’s so strong it even shapes their appearance (such as the couple of boys/girls who both wear vintage wedding dresses or the holy hermit who flaunts a mane of white hair similar to that of his steed). Devoid of voice-overs and only very rarely featuring excerpts of conversations, Amor Fati observes the expressions and gestures which are born out of sharing the same daily universe (in terms of values, beliefs, customs) in order to reconstruct stories which are similar to one another, despite it all.

Amor Fati is best enjoyed without trying to understand every last detail. Above and beyond the biographies of the couples making up the film, what really counts is observing the result of a unique encounter: that of two beings who complete one another, whose mutual presence is enough for them to feel fulfilled. Marked by some sort of magical realism which sees the viewer drift between dream and reality, Amor Fati offers up an alternative to a world obsessed with performance, even within romantic relationships (the obligatory stage-managed posts on social media, the wild chase for the perfect match on Tinder…). It’s an enchanting parenthesis which helps us to understand that not everything can be calculated and that, at times, true happiness comes when you just stop looking for it.

“The characters in my film are life’s heroes; they are my heroes” 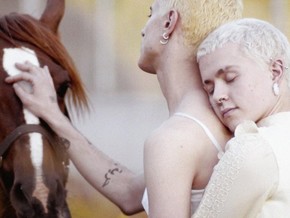