Do we really need another Banksy documentary? There is already an oversaturation of articles, films and conversations about the contemporary art world's most famous graffiti artist. So much so that it's got to the point where it seems hard to care about yet another attempt to tell the story of irascible Banksy. Does anyone not know that he's the artist whose works first appeared on the walls of Bristol's streets in the 1990s and who then went on to global superstardom while creating a lot of faux excitement about his true identity? The quest to unravel who is the Clark Kent behind this spray-can Superman is at the heart of Banksy Most Wanted [+see also:
trailer
film profile] by French co-directors Aurélia Rouvier and Seamus Haley, which is a Spotlight Documentary at the online Tribeca Film Festival.

The documentary is an example of good journalism more than it is of inspired cinematic storytelling. It's a terrific starting point for the uninitiated because it offers a very clear and concise recounting of the Banksy story, told using informative talking heads and archive footage. It contains summaries of Banksy's greatest hits: the blitz on the walls and cars of New York and San Francisco, and the Israeli-Palestine segregation wall; the creation of The Walled Off Hotel in Jerusalem; the destruction of the “Girl with Balloon” painting moments after it had sold for more than €1 million at Sotheby's; the artwork in Port Talbot protesting against climate change; the creation of Dismaland to mock Disneyland; and the people of Folkestone fighting to keep a Banksy in their town.

The interviewees, including Banksy's former agent Steve Lazarides, are enlightening but fawning. In everyone's eyes – from the journalists who try to reveal his identity to the capitalists that rip his artwork down from walls to sell, and the guide to Banksy's work in Bristol – Banksy is a genius; he's even called the Picasso of modern times. That might be true, and his artwork and political statements are often inspiring, but such admiration tends to make for bland documentaries. The harshest criticism levelled at him is that he's become the very thing he supposedly despises – a capitalist. Shock!

The directors do a great job of tracking down the journalists who have come up with the best theories on the true identity of Banksy and getting them to talk about how they came up with their hypotheses. There is the likeable Scottish journalist Craig Williams, who linked the appearance of Banksy artworks to the gigs of Massive Attack and deduced that the artist must be none other than band member Robert Del Naja. Then there is the forensic expert brought in to give credence to the theory that Banksy is Gorillaz musician Jamie Hewlett, an idea first floated because company records linked the Banksy-directed film Exit to the Gift Shop to the musician. Then, finally, there is the Daily Mail journalist Claudia Joseph, who insists that the artist is a middle-class former public schoolboy called Robin Gunningham. But the way it's told, with the heavy emphasis placed on undermining these attempts to reveal the artist’s real persona, feels as though Banksy himself might have sanctioned it. There is nothing revelatory here, just a well-told, affectionate appraisal of the story so far…

Banksy Most Wanted is a French production staged by Cross Borders Films, Scarlett Production and Canal+.

more about: Banksy Most Wanted 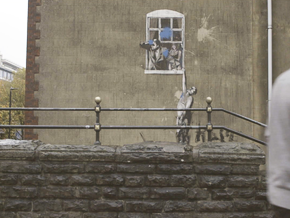