21/05/2020 - Pedro Ballesteros paints a portrait of artist Jaume Plensa, introducing us to his body of work around the world, and affording us a glimpse of his magnetic personality in between his words and images

“You don’t decide to be an artist; it’s something that’s unavoidable,” states Jaume Plensa in one of the many touching moments in this portrait of his body of work, personality and sources of inspiration. The documentary Can You Hear Me? [+see also:
trailer
film profile], directed by Pedro Ballesteros (a seasoned TV filmmaker), is being world-premiered today, 21 May, at the 23rd edition of the Barcelona International Documentary Film Festival, which is unspooling from 19-31 May on the Filmin platform.

The 75-minute film is structured around concepts such as Spheres, Words, Home, Memory, Silence and Time – everyday elements that are profoundly related not only to the body of work of this internationally renowned Catalan artist, but also to his most deeply rooted principles and thoughts. Ballesteros closely accompanies Plensa during the preparation of an installation for the lobby of a New York skyscraper, the creation of a retrospective at the MACBA in Barcelona, the inauguration of an exhibition in Stockholm and the completion of other projects in various locations in France, Madrid and Japan, in order to fathom the poetic and symbolistic aspects of his enormous, well-known sculptures, while the protagonist’s voice-over breaks down the motivation that drives him to create them.

With barely a few minutes dedicated to his life story (consisting of just a clutch of black-and-white photos), to round off this in-depth and flattering analysis, the director preferred to hand the microphone over to art consultants and various directors of suitably prestigious museums and galleries, who give their opinions on the meaning of Plensa’s legacy and his particular sensibility. This kaleidoscope of a movie, incorporating captivatingly beautiful scenes captured by the gracious camerawork of Pol Orpinell, also ventures into his studio in Barcelona, where we see Plensa commanding his team of collaborators and appreciate the complexity of his technique, ever in harmony with nature and, above all, with his thoughts.

And so, as if it were a kind of voyage taking in Plensa’s works scattered all around the globe – and some of the places are undeniably breathtakingly beautiful – this is how he rounds off the profile (which is always affable, much like the nature of the subject himself) of a man at one with the universe, who loves his works as if they were living creatures (they are like children to him, after all), encourages poetic reflection in public spaces and even, in one scene, makes a quotation that betrays his love of film (while discussing the Spanish-Argentinian co-production The Secret in Their Eyes [+see also:
trailer
making of
Interview Juan José Campanella [IT]
Interview Ricardo Darín [IT]
Interview Soledad Villemin [IT]
film profile] by Juan José Campanella and the profound impact it had on him, he ends up confessing, “A creator cannot afford to be distracted”).

Can You Hear Me?, the screenplay for which was penned by Pedro Ballesteros and Aurora Sulli (who was also in charge of the editing), was staged by Mallerich Films Paco Poch, in co-production with Plensa Studio Barcelona, Galerie Lelong NY, Gray Gallery Chicago-NY and Galerie Lelong & Co Paris.

more about: Can You Hear Me?

Barak Heymann invites viewers to familiarise themselves with the charming, magnetic personality of the Israeli genius, as he inspects the upkeep of some of his original works

Pedro Ballesteros paints a portrait of artist Jaume Plensa, introducing us to his body of work around the world, and affording us a glimpse of his magnetic personality in between his words and images 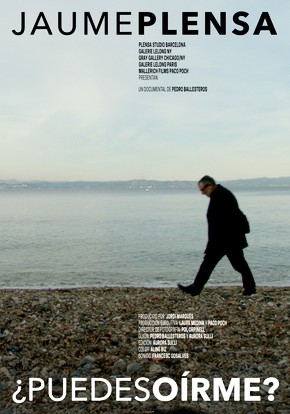 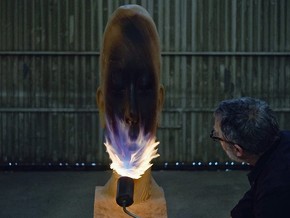