26/05/2020 - In his visually playful documentary, Arthur Franck looks for volunteers to join him on stage as he tells the story of hypnotist Olliver Hawk

For his third feature film – now shipped off to the online edition of DocsBarcelona – Arthur Franck could easily have put a blindfold on his unsuspecting viewers, for they are bound to leave just as confused without actually having had their eyes covered. Visually playful, The Hypnotist [+see also:
trailer
film profile] feels like a pleasantly convoluted noir mystery, with a moody voice-over to match and the constant clacking of the typewriter, both recounting the story of Olavi Hakasalo, also known as Olliver Hawk – his preferred moniker when talking about hypnosis, which he dedicated his life to.

Quickly establishing that (luckily for the filmmaker) nobody really knew the guy anyway, Franck goes out to play. If hypnosis is all about “guiding a person’s mind towards a certain direction”, determined by the hypnotist himself, he is doing a pretty good job of it, too: sharing brief insights into Hawk’s complicated existence yet refusing to settle on one narrative. Very much like his protagonist, then, reportedly raised by a clairvoyant mama. Inspired by Mandrake the Magician comic strips, he started studying the craft at the age of nine, when his peers “were still busy destroying crows’ nests”. Fast-forward a few years, and Hawk is touring Finnish towns, adopting bears as pets, and seems to think of Jesus as a long-lost colleague – all before accusations of fraud start flying around sometime in the 1980s.

There is something very Citizen Kane-ish to this tale, as here comes another ambitious man dedicating everything to a grand future that never truly materialises. Only happy when in control, he always wants to be pulling the strings – even if it only serves to ridicule small-town folks, led to believe by his particularly persuasive voice that money literally grows on trees and is finally up for grabs. And if that doesn’t happen, if his powers fail, well – he might convince himself otherwise.

A bit of a trickster himself, Franck may be exploring a real talent here as much as the state of delusion, the kind of personality that needs to stay at the very centre of attention, both on stage and off. Hawk seems to be looking down on people, so easily manipulated by a travelling hypnotist or a smooth politician, and the mere thought that he might not be so special either keeps on pushing him further. This might explain the film’s sudden swerve into the inner machinations of “Kekkoslovakia”, named after Urho Kekkonen, the Finnish president for a whopping 25 years, and Hawk’s supposed influence over the political landscape of that time. Future film studies dissertations about “unreliable witnesses” just scored a new hero.

With its focus on Finnish politics, The Hypnotist goes a bit too local at times, and there is a curious case of a badly glued-on eyebrow that’s bound to ruin the illusion even before Franck’s big reveal at the end. But coming to this story with no prior knowledge, there is simply no telling which parts should be believed, or whether some of its crazier conspiracy theories should be taken seriously or laughed at. Then again, as is stated here, “Not everything we see is always true.” And as long as it makes for a good story, just bring on the blindfold again.

The Hypnotist was produced by Oskar Forstén for Finland's Franckforsten. World sales are by Filmotor.

more about: The Hypnotist

"There’s a documentary for every single viewer"

In his visually playful documentary, Arthur Franck looks for volunteers to join him on stage as he tells the story of hypnotist Olliver Hawk 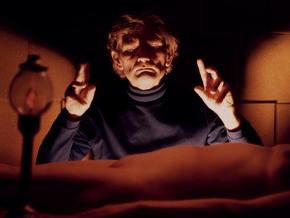