The 23rd DocsBarcelona International Documentary Film Festival, which audiences can enjoy between 19 – 31 May on the Filmin platform, has saved its riskiest and most adventurous titles for the competitive “What the Doc” section. Indeed, Salka, In No Man’s Land [+see also:
trailer
film profile], the fifth feature directed/written/produced by the Catalan filmmaker living in Ibiza (where he also directs his film festival) Xavi Herrero transports the audience to the border between Mauritania and the Western Sahara, inviting us to climb aboard an SNIM-company train which crosses 700 kilometres of desert before ending its journey in Puerto Cansado. Conveyed within its wagons are industrial materials, but also various individuals looking for a future outside of the beaches of the bay of Nouadhibou.

Salka... truly immerses the viewer: into a landscape, a journey and a state of mind. The infernal noise of the wagons, the inhospitable yet extraordinary environment and the combination of anonymous Saharawi poems – read by various voices off-camera – and an incisive soundtrack foregrounding the dystopic and, at times, nigh-on oneiric nature of the world before us, all work to transform this journey into a unique, beautiful and breathtaking experience.

With virtually no dialogue, and allowing the desert and the sea to merge together in all their immensity at opportune moments, Herrero conveys his fascination for lives lived in exhausting temperatures and inhuman conditions with great organic flair: rust and metal, silent, hardened faces and the train’s shadows cast on the red-tinged sands of the desert easily captivate viewers who are open to embarking upon a unique and engaging experience which isn’t without its dramas.

At the end of this journey from inland Mauritania to the waves of the Atlantic, the protagonist – dressed as a man – will try to start a new life on the Canary Islands. In this sense, the sea comes to replace the desert in an odyssey which oscillates between the harshest of realities and the most unnerving beauty.

Salka, In No Man’s Land – a documentary in Arabic, French and Spanish – is a Mauritanian-Spanish (Ibizacinefest) production, made with the support of the NGO N.A.D., Proyecto Colibrí and Un lápiz, un dibujo.

more about: Salka, In No Man's Land

Yesterday, Ezequiel Yanco’s movie came out on top after the winners of the fifth edition of this independent and arthouse film festival held on Ibiza were announced 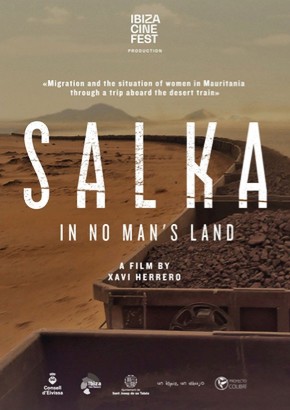