We had the chance to watch Cathal Nally's debut feature, a crime-dramedy set in Dublin entitled Be Good or Be Gone. In March, the flick was world-premiered at the 18th Garden State Film Festival in the USA, where it won the Award for Best International Feature. Before shooting this film, Nally worked as a director and producer on a few shorts, such as The Job (2013), Tiger (2012) and Voices (2011).

The story of Be Good or Be Gone, penned by Les Martin (here also serving as a producer and lead actor) and Paul Murphy, is set in the Irish capital over the course of four days and follows the misfortunes of two petty-criminal cousins, Ste (Martin) and Weed (Declan Mills), who receive a temporary release from prison. Ste wishes to make a better life for himself, his partner Dee (Jenny Lee Masterson) and his six-year-old daughter Ellie Mae, whilst Weed – perhaps the most interesting character in the entire movie – feels a weird desire to conquer the world of high fashion, despite his criminal past and his crippling drug addiction.

In general, the pair work well on the screen: the dialogue sparkles and the actors' performances are credible and effectively contribute to depicting the two outcasts' conflicts and miseries. Similarly to another Irish flick released this year, Paddy Slattery's Broken Law [+see also:
film review
film profile], Cathal Nally's film is able to organically mix genres (comedy, drama, crime, romance and action) and revolves around an odd couple in action in the suburban districts of Dublin. However, Be Good or Be Gone treads a totally different narrative path and does not shy away from brutal violence. In this respect, the plot reaches a decisive turning point when Weed forces Ste to take part in an armed robbery at a small convenience store, led by a psychopathic accomplice (a brief but effective cameo by Graham Earley). The heist goes badly wrong, resulting in a pathetic amount of loot and one of the two shopkeepers coming within an inch of his life. In addition, a ferocious gangster called Braler (Alan Sherlock), along with his henchmen, makes the pair's life even more complicated and isn’t afraid to bask in sadism and cruelty.

Finally, it is worth mentioning the work of DoP Stephen C Walsh, whose stark contrasts between the gloomy avenues at night and the paler apartment blocks and courtyards during the day really convey the depressing atmosphere of Dublin's working-class suburbs. Another highlight is the score by two-time Emmy Award-nominated composer Joseph Conlan, whose original music skilfully ties in with the film's mood. All in all, Nally's debut feature is a promising film, rich in surprises and enhanced by a well-oiled ensemble of actors as well as a light touch of surreal humour.

Be Good or Be Gone was produced by Les Martin, Cathal Nally, Declan Mills and Cainneach Mac Eoin for Ireland’s Skidaddle Films Ltd.

more about: Be Good or Be Gone 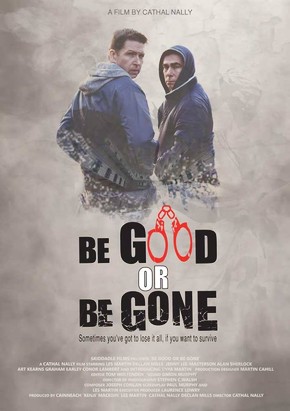