A hybrid work mixing rotoscopy, collages, found footage and experimental abstractions, the film is a fascinating kaleidoscope of incredible richness and visual inventivity, no doubt deserving to be seen on the big screen to be fully appreciated in all its immersive glory. A dizzying whirlwind woven around an enigmatic narrative entanglement, at the border of the metaphysical thriller and of cosmico-political sci-fi. To this, add a few explicit references to Andreï Tarkovski’s Mirror, to the cinema of David Cronenberg and to Ursula Le Guin’s novel The Word for World is Forest, and you will still be very far away from the “reality” of the film’s universe, which progresses by successive and disruptive steps around concepts such as “opening a box and finding a box in a box” or “watching a film about someone who is watching a film, in which someone is watching a film”, all of it anchored into a continuum of “a freefall across space and time.”

Beyond the time it naturally takes to get used to the collision of visual styles, echoes, resonances, interferences and other hypnotic avenues the film is full of, this (fascinating and almost “Godardian”) tumultuous cascade of intelligence nourished by several characters’ voice-overs, draws the shadow of a throughline. Around a table, in the higher spheres of a ministry (which orchestrates a kind of surveillance capitalism that makes money off transforming lives into data), Martin is accused of being a ghost and an informer. Who is he? Detective Ambroz leads the investigation, which only leads him to unsolvable secrets of interpretation and identity, before the dream police take over from him in the forest.

In a world “divided between those who sleep and those who whisper in their ears” and where an anti-stress saving mechanism, a constant sweeping through diagrams, maintains the appearance of everyday life while “we really are going through the apocalypse”, powerful organisations equipped with merciless agents and unlimited funds are engaged in secret experiments on the two-way highways of time travel. There we meet a woman reading microfilms in a bookstore, chunks of memories from Martin who has fled to the countryside with his lover, an urban report from Electric Sam who observes “different territories, different rules”, the foundation of the city, the subconscious of Earth and a great many other (more or less demented) things, the author of this text only pointing out a few clues randomly gathered from an overwhelming flow of visual illustrations, like a kind of meeting full of unsaid things between Dziga Vertov and Philip K Dick. A maelstrom which Dalibor Baric pushes to its maximum and which makes Accidental Luxuriance of the Translucent Watery Rebus a film like no other which might annoy some in its extremity, but which other will be eager to rewatch to try and decrypt its innumerable qualities.

Accidental Luxuriance of the Translucent Watery Rebus was produced by Ivan Katic for Kaos.

more about: Accidental Luxuriance of the Translucent Watery Rebus

“Give me some freedom to play!”

We talked to the director of Accidental Luxuriance of the Translucent Watery Rebus, Dalibor Baric, about the importance of leaving some things unexplained. Including that title

European entries A Storm Was Coming, For the Time Being and The Trouble with Nature also departed triumphant from the fifth incarnation of the Galician festival 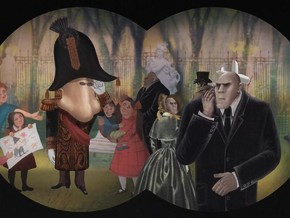