“We’re not children anymore, thinking about dreams. We have to think about money now”. It’s a bitter, disenchanted statement which, when delivered by a young, 13-year-old girl, hits a hundred times harder. This is the reality into which director Pierfrancesco Li Donni (The Gold of Naples) immerses himself in his new documentary Our Road [+see also:
trailer
film profile], declared Best Film in the Italian competition of the recent Biografilm Festival, the 16th edition of which unspooled online; the reality of dropping out of school and an adolescence deprived of dreams, in Zisa, a working class neighbourhood in Palermo where unemployment reaches as high as 50%, where scores of youngsters abandon their studies as soon as the law allows it - if not before - and where a record number of offences are committed by minors.

Li Donni homes in on three teenagers in particular – Daniel, Desirée and Simone – and shadows them in their final year of secondary school. It’s a tricky time of transition for these youngsters from “difficult” neighbourhoods and of limited ambition, who see school as an obstacle to work, whatever form that work may take. “I want to be independent and free”, insists super-young Desirée, with her long blond hair and warrior-like temperament. Simone’s aim is to buy himself an Ape 3-wheeler and sell fruit by the roadside. Daniel, meanwhile, wants to be a goldsmith, or maybe an electrician. There to remind these kids that they’re legally obliged to finish their studies, at least until the age of 16, is Mr. Mannara, one of those teachers who in addition to teaching you about Dante and the Cursed Poets also teaches you about life. Mannara is highly respected by his pupils, and the most interesting scenes unfold within the classroom where he gets them thinking about issues such as slavery and homosexuality; and then, to lighten the mood somewhat, he invites them to “rap” the tercets of the Divine Comedy.

The director also follows the three youngsters outside of the school gates: Desirée and her excursions with her friend Morena, Daniel and his goldsmith apprenticeship, Simone and his goat and horse farm hemmed in by the buildings of via Colonna Rotta. The traditional Fires of St Joseph (ritual bonfires lit each year in the narrow streets of the historic centre and the neighbouring areas, in celebration of the homonymous saint) become an opportunity for these Zisa teens to attack police officers and carabinieri. “Does it make you feel powerful?”, asks Mr. Mannara, stunned to see Daniel and Simone rejoicing in the news that theirs is the only neighbourhood where disorder has been reported.

It’s amidst this constant battle between the perilous tendencies of a disadvantaged community and the recourse to culture as a tool for aspiring towards a better future that Li Donni’s documentary moves; a work which, aside from the tact and empathy it demonstrates in its treatment of the subject, serves to remind us of the capital role school plays in building a healthy society, especially at a time when, in the words of the director himself, “lockdown has heightened inequalities and distance learning has lifted the lid on the already noted problems experienced by those who try to learn remotely in troubled zones”.

Our Road is produced by Ladoc with the support of MIBACT and Siae as part of the “For Those Who Create” programme, and with the backing of the Sicilian Film Commission as part of the “Contemporary Senses” project. Following its participation in Biografilm, the film will be presented in competition at the upcoming Sole Luna Doc Film Festival, unspooling from 6 to 12 July in Palermo.

more about: Our Road 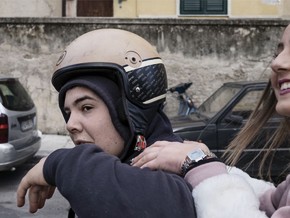