24/06/2020 - CANNES 2020: Fanny Liatard and Jérémy Trouilh successfully and skillfully reinvent the social realist drama by tinting it with space-themed onirism and an epic dimension of resistance

On the big screen, the banlieue and its housing projects with their interminable walls of buildings constructed in the 1960s and nowadays denounced for their inhumanity and as breeding grounds for social ghettoes, almost never escape the social realist treatment, in stories that are often about juvenile crime and sometimes about the hope for redemption and the longing to escape. But Gagarin [+see also:
trailer
interview: Fanny Liatard and Jérémy Tr…
film profile], the feature debut from Fanny Liatard and Jérémy Trouilh, recipient of the Cannes 73 Official Selection label and unveiled at the Marché du Film Online, completely escapes this stereotyped tableau, audaciously and masterfully plunging into a mix of genres, opening totally unexpected space-time horizons and sending coded messages of resistance to those who can see the soul of places and who can look far beyond the walls.

370 apartments considered unsanitary by certain inhabitants, a compact bloc of ten buildings of 13 levels made of red bricks, chronically out-of-order lifts, micro-cracks in the walls, land subsidences, obsolescent water and electricity equipment, etc. The verdict from municipal technical services is indisputable: the Gagarin housing project in Ivry-sur-Seine, just outside of Paris, inaugurated in 1963 as a social utopia by the famous Soviet cosmonaut, has to be demolished. But a young, 16-year-old Black man, Youri (the charismatic revelation Alséni Bathily) refuses to be evacuated and rehoused after he tried (handyman as he is) to repair (with second-hand materials) the communal parts of the building, with the help of his friend Houssam (Jamil Mc Craven) and the beautiful Diana (Lyna Khoudri), a Roma girl living in a nearby encampment.

The Gagarin housing project is emptying out, the families are leaving, the workers coming in to prepare for the dismantling, and Youri (without a family since his mother vanished away with a man) is slowly forgotten about, alone inside the gigantic building. Passionate about astronomy, he decides to organise himself a lifestyle of self-sufficiency similar to that of a space capsule, piercing walls, redecorating flats like sci-fi spaces, balancing together air, water and soil to grow plants in a greenhouse, and only ever bumping into a local drug dealer (Finnegan Oldfield), himself also hostile to the idea of leaving at first, and into Diana, with whom he soon begins a romance. But as the threatening hour of the demolition is coming closer, reality becomes harder and harder to handle, and Youri’s mind escapes a little farther every day…

Grabbing onto a very timely, very real event (the Gagarin Towers were demolished in August 2019), Fanny Liatard et Jérémy Trouilh successfully combine a story that is very anchored in contemporary reality (a young man of his time, cables, crane, survival blankets, neons, alarms and smoke, hermetic palisades, a telescope, glacial temperatures, concrete, the roof, romance, friendship) with an oniric dimension in zero gravity (Youri as the surviving cosmonaut, the last man). This mix, sprinkled with archive images from the birth of the housing project, is also a symbolic and resistant representation of the banlieue, connecting past, present and future, and turning its back on cliches. The whole project radiates cinema in terms of directing and inventive, clever visual and sound design, placing Fanny Liatard and Jérémy Trouilh among the young talents who should be followed very closely.

“To our character, this building is like a spaceship: if you go out, you can’t breathe”

Control of the banlieue and its traffic networks, the weight of the past, present conflicts and dreams of faraway futures all collide with a cosmic phenomenon in Cédric Ido’s original film 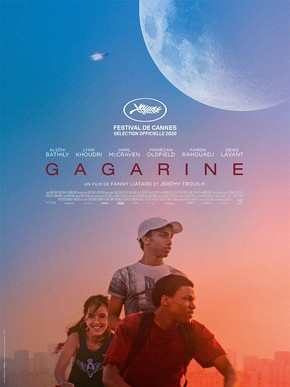 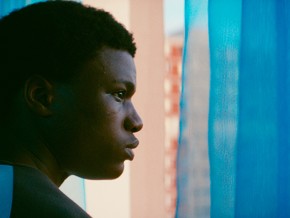 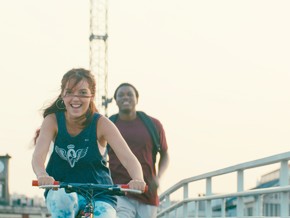 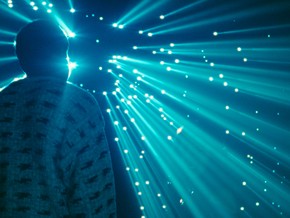 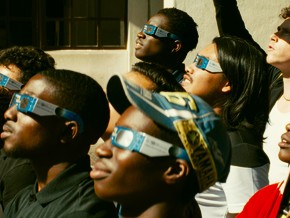