When a filmmaker already quotes Jorge Luis Borges in his director’s notes, one half-expects what’s in store – in short, anything but your typical, easy-to-follow narrative. Dani Rosenberg’s The Death of Cinema and My Father Too [+see also:
trailer
film profile], granted the Cannes 2020 label, combines shaky archive footage with fictional scenes, VHS short films and a whole subplot involving an Iranian military attack on Tel Aviv. Oh, and “House of the Rising Sun”, blaring its tale of a father who was “a gamblin’ man down in New Orleans”. And yet, despite all that jazz, ultimately it’s an extremely intimate affair about a son who doesn’t want to let go of his withering father.

That sounds simple enough, but it takes some proper digging to get to the core, and Cannes’ stamp of approval is unlikely to broaden the appeal of Rosenberg’s story, which is meandering and filled with personal references. It’s all a bit tiring, frankly, like politely listening to someone’s story about “his uncle’s brother’s friend” at some family gathering: you get the love, but it won’t stop you from looking at your watch. Still, some things stick, mostly because every once in a while, Rosenberg’s desperation seeps through as he follows an aspiring director (Roni Kuban), himself following his ailing father (Marek Rozenbaum), convinced that Tel Aviv is about to be bombed – or so it says in the script of his son’s “comedy” that he reluctantly agreed to act in. The son is using whatever ideas or skills he has to force his dad to stay around, just for a little bit longer.

“Force” because, fictional or not, the grumpy parent in question is not exactly willing to cooperate. Despite occasional lighter scenes and all the ice-cream eating in a car one could possibly wish for, The Death of Cinema and My Father Too is not some rosy, let’s-hug-it-all-out film, with the cries of “I don’t want to! Get a job! Leave me alone!” serving as his reaction to the incessant filming. Not that anyone listens. At times, this work exudes a similar uneasiness to the one found in the equally parent-centric documentary The Disappearance of My Mother [+see also:
film review
trailer
film profile], with the Italian matriarch also advising her camera-carrying offspring to bugger the hell off. Hidden behind all the fictional inserts, Rosenberg’s take steers clear of feeling that exploitative, but one thing is clear: it’s not the father that has trouble letting go – it’s the son.

Rosenberg reportedly started to make the film when his father fell ill, and there is a desire to freeze time here, or just to slow it way down. Although it quickly becomes almost impossible to state what is true and what’s not, at least after one viewing, the whole thing might just as well serve as some kind of therapy session, with the character (or the director, take your pick) losing a parent while preparing to become one, struggling in his marriage and dubbing his wife “Lena Dunham” when she dares (!) to suggest a change in his script. It’s a pity that the most emotional scenes frequently get lost in here somewhere, almost as if Rosenberg were sheltering himself from too much pain, hiding within the indeed very labyrinthine structures he has managed to erect. “Remember it isn’t real,” says someone to a child performer here, anxious over the older actor’s state. For all we know, Rosenberg might be repeating it to himself, too.

The Death of Cinema and My Father Too was produced by Stav Morag Meron, Carol Polakoff and the director himself for Pardes Films, and co-produced by Edgard Tenembaum for Tu Vas Voir. International sales are handled by Films Boutique.

more about: The Death of Cinema and My Father Too

Maria Speth and Bence Fliegauf are taking aim at the Golden Bear with their latest works, selected for the Berlin Competition

As with every year, the 22nd edition of the Geneva-based festival promises tantalising cinematic discoveries despite health crisis constraints 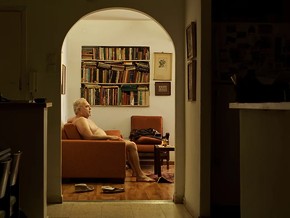