08/07/2020 - Véro Cratzborn’s first feature film follows in the footsteps of a teenage girl reluctantly entering into adulthood while facing up to her father’s madness, a condition she finds impossible to express

Léonie Souchaud and Alban Lenoir in Into Dad’s Woods

A sincere, moving portrait of a “forgotten child” - a teenage girl who’s growing aware of her father’s illness as she enters into adulthood - Into Dad’s Woods [+see also:
trailer
interview: Véro Cratzborn
film profile] is the first feature film by Belgian director Véro Cratzborn, who made a mark with her short work Les Biches.

Fifteen-year-old Gina is growing up within a loving family on the edge of the forest. She admires her father Jimmy, an unpredictable and fanciful man whose excesses she’s quick to forgive. Until the day the situation becomes untenable: Jimmy tips over the edge and the fragile family balance is shattered. Confused and in revolt, Gina allies herself with Nico, an adolescent from her neighbourhood, with a view to saving her father.

Blinded by daughterly love, Gina doesn’t see her father slide from fantasy into madness. This madness, which appears gentle in Gina’s eyes, ultimately proves to be destructive, obliterating the fragile bonds which link him to his wife and children. With a heavy heart, overwhelmed with responsibilities and crushed by the subsequent mental and financial burden, Gina’s mother is forced to make a difficult decision which will alienate her from her eldest daughter but which will better protect the siblings.

Gina will find herself having to break with the Oedipal set-up in place, leaving her childhood behind somewhat sooner than expected. As such, almost without her knowing, we follow her on the path of sentimental emancipation and on the surprising journey she takes to fulfil her destiny as a woman. In Nico she finds another male ally; not a replacement but someone who allows her to envisage a different kind of relationship with a man - when you’ve grown up in the company of madness, it’s difficult to separate it from normal life. Gina will have to step outside of herself, beyond the limits of her private garden, in order to see the light inside her father’s woods as it filters through the treetops, but also the darkness encompassing the undergrowth.

Beyond this stirring father-daughter relationship, the film also touches upon the question of social status. Gina and her family live in social housing. It’s clear that month-ends are difficult. Her mother has a steady job, but her father’s volatility undermines the household’s stability. But the mother doesn’t have just any old job: she works as a housekeeper for a (very) well-off family. Accustomed to life in her neighbourhood, Gina is taken aback by this opulence, and at a time when she’s trying to find her place in society. She must switch from playing a role as a girl to that of a woman, and ultimately take a position.

In the shoes of Gina’s mother, Ludivine Sagnier is the living embodiment of strength and charm, light and determination. Perhaps that’s why she’s been able to support the man she loves for so long. It’s also why, when she’s backed against a wall, she’s able to make a painful and alienating decision vis-à-vis the love of her life, played by Alban Lenoir, whose eyes twinkle with madness. Léonie Souchaud, meanwhile, previously seen in Fanny’s Journey [+see also:
trailer
film profile], lends her spontaneity and down-to-earth nature to Gina’s growing sense of awareness.

Into Dad’s Woods is produced by Iota Production (Belgium), Blue Monday Productions (France) and Louise Production (Switzerland). KMBO are releasing the film on 8 July in France, while Iota Distribution will distribute the work in Belgium on 15 July.

more about: Into Dad's Woods

"We worked hard on his unravelling, his descent from the fanciful to the strange, and then into madness"

Véro Cratzborn’s first feature film follows in the footsteps of a teenage girl reluctantly entering into adulthood while facing up to her father’s madness, a condition she finds impossible to express

Cinergie met with Nicole Gillet, the general delegate of the Namur International French-Language Film Festival, to talk about the 34th edition of the event

Producer Isabelle Truc (Iota Production) tells us about her career, the situation in French-speaking Belgium today, her recent successes, and her ongoing projects 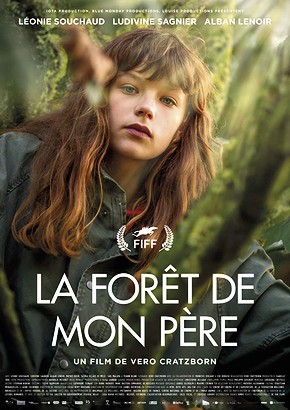