As part of KVIFF at Your Cinema, this summer’s pared-down version of the Karlovy Vary International Film Festival, Šimon Šafránek’s Meky [+see also:
trailer
film profile] stood out as the lone Czech production in a condensed selection. The documentary portrait of Slovak pop star Miroslav “Meky” Žbirka screened simultaneously across Czech cinemas and, appropriately for this localised festival format, tells a story that many Czech and Slovak viewers would already know well.

With great access to televised performances, Šafránek showcases what made the singer-songwriter into a household name to the Czechoslovak youth of the 1970s and 1980s. Žbirka is the son of an English mother, and his music – performed with his bands Modus and Limit – rode the wave of rock-and-roll appeal by way of The Beatles and The Kinks, which heavily influenced his own youth. The only point of conflict in this mellow documentary comes in the form of Laco Lučenič, Žbirka’s bandmate, who asserts that he was behind their popular sound and receives none of the credit. In droll fashion, Šafránek positions Lučenič as the Salieri to Žbirka’s Mozart.

The director has the difficult task of making the scale of Žbirka’s success clear for those less aware of his career, while maintaining an intimacy that can keep those familiar with the singer entertained. Editor Šimon Hájek cuts between archive footage of live performances and Žbirka in the present; while the tone is not quite elegiac – Žbirka is still performing today – it is certainly nostalgic, as it savours the apparent ease with which the humble, “buttoned-up” frontman found fame. Despite, or perhaps because of, the singer’s unassuming demeanour, he became the star, while Lučenič, who looks like a typical rock star, was consigned to a supporting role.

When Žbirka describes his brother’s death, which occurred shortly after the shock of the Prague Spring in 1968, the viewer might expect to see a dramatic shift in his narrative, but it quickly returns to its hurried pace. As he quips: “But life went on, right? I was 16 – what did I know about normalisation?”, Meky does not go into too much detail about the totalitarian regime that impinged on Žbirka’s career, nor does it delve into the tragedy that could have derailed it. Instead, it celebrates the joy that his music brings to him and the community that it creates for others.

As he strolls through Abbey Road and Muswell Hill (the London home of both Žbirka and The Kinks), and drives in Bratislava past the spot of his demolished youth club, it is poignant to see him reconnecting with his unique past. Šafránek knows Žbirka is an outsider who broke through, who signed with RCA in the USA, and who writes his albums in both Slovak and English before recording with Paul McCartney’s former bandmates. But the star’s modesty remains constant; his frequent self-aware asides, questioning the level of wisdom he can really impart, give the film a humorous tone. Just decades after his lyrics had to be assessed word by word by government ministers, long delaying the release of Modus’ first album, it is comforting to see this levity.

Meky is a pleasant, if unspectacular, journey through Czechoslovak pop-music history, which is certain to entertain existing fans of Žbirka. But there is also much to enjoy for newcomers: an insight into the survival of pop over politics, and the humble individual that became a star.

Meky is a Negativ (Czech Republic) and Pubres (Slovakia) production in association with Miro Agency, Czech Television and RTVS. Negativ and Bontonfilm, a.s. are handling sales. It was released in the Czech Republic on 9 July and is set to come out in Slovakian cinemas on 16 July. 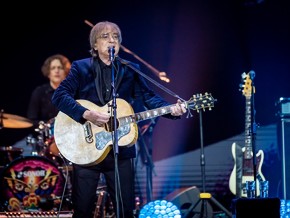