Eoin Macken's Here Are the Young Men [+see also:
interview: Eoin Macken
film profile] is one of the titles that were screened during the 32nd edition of the Galway Film Fleadh (7-12 July). Macken's adaptation of Rob Doyle's novel of the same name follows his previous feature, Cold (2013), which centred on two estranged English brothers, who are ostracised in a small village in West Ireland.

Macken's film is set against the backdrop of the early-2000s “Celtic Tiger” Ireland and sees three boys, called Matthew (Dean-Charles Chapman), Rez (Ferdia Walsh-Peelo) and Kearney (Finn Cole), ready to enjoy their “final summer of freedom” after the end of their last school year, and eager to fill their empty lives with sex, drugs and transgression. The film opens with a funeral scene, and it is clear that something has gone wrong from the very beginning. We soon get to know the three lead characters: Kearney, the leader of the group, who represents a vivid example of toxic masculinity and is heavily obsessed with the USA; Rez, a more nihilistic character who ends up in hospital after a night of excess; and Matthew, who seems the most sensitive and lucid of the three.

The first turning point in the story takes place when the three boys witness the death of a child in a road accident. This traumatic event seems to gradually shake up the trio, and Matthew in particular, who later begins to question his dangerous friendship with Kearney. Their conflicts become more open when Kearney starts harassing a homeless man and pushes Matthew to give him some lethal drugs. While all of the adults remain on the fringes of the narrative, Matthew's girlfriend, Jen (Anya Taylor-Joy), plays a more influential role, acting as a sort of “voice of conscience”. She appears to be much more mature and self-aware than the three boys, and invites Matthew not to be ashamed of his sensitivity.

On the whole, the drama is characterised by an engaging narrative pace (enhanced by a number of smooth editing choices) as well as by a powerful score and some dynamic cinematography that accurately depict the turbulent (and hallucinatory) lives of these three “young men”. A recurring device that brings in Matthew and Kearney's trippy experiences is the fictitious television programme Big Show!, the crazy host of which recklessly encourages behaviour of the worst kind. While these intermissions may initially appear as a little over the top, they effectively serve the purpose of visualising – and emphasising – the characters' distorted perception of themselves and the reality surrounding them, which will be essential to the development of the final stages of the story.

more about: Here Are the Young Men

Interview: Eoin Macken • Director of Here Are the Young Men

“When you’re in a night club, listening to music, nothing else matters apart from your world and its orbit”

DMovies sat down with the Irish filmmaker to talk about the adaptation of Rob Doyle’s novel, the challenges involved in transposing it to the silver screen, toxic masculinity and much more 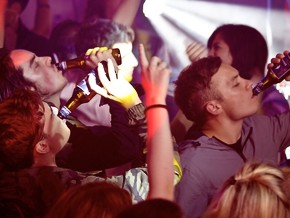 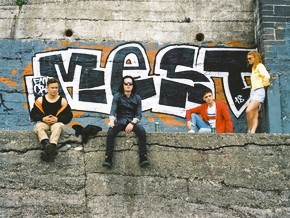 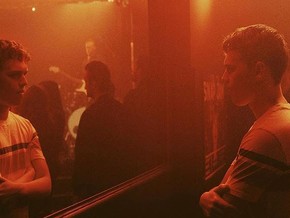