When a director pulls out his camera and confesses, in front of the mirror, that he plans on shooting the umpteenth film about his family, we fear the worst, because the deluge of home-focused movies following the success of marvels such as Lots of Kids, A Monkey and A Castle [+see also:
film review
trailer
interview: Gustavo Salmerón
film profile] is starting to wear thinner than Christmas dinners. This happens at the beginning of Journey to Utopia [+see also:
trailer
film profile], when director Erlend Eirik Mo presents to us, through the lens of his camera, his opera singer wife and his children, his teenage daughter in particular: a girl who would rather waste her time sat in front of Netflix products than practice playing the stringed instrument which, according to her parents, will one day bring her happiness.

But what unfolds before viewers’ eyes over the next 89 minutes is far from the result of any algorithm, since they will bear witness to the rather special odyssey of this family who are deeply concerned about climate change and committed to researching ways to reduce their individual impact on the planet. This leads them to join with a group of people looking to build a new community respectful of the ecosystem, leaving their comfort zone in Norway behind them to set up home in the Danish countryside, becoming something skin to ecological refugees.

But is it really quite so easy to fight the status quo? To what extent are dreams simply fantasies? And how could we ever imagine that a lesson on integrity would come from such unexpected quarters? With a great deal of (Nordic) humour, at times fantastic situations, domestic drama and a camera which loves the landscape, children and nature, Journey to Utopia turns out to be exactly what its title tells us it is: a journey through the contradictions, paradoxes and problems that are part and parcel of cohabiting, of family life and of contemporary society. At certain points it’s reminiscent of a dogma film but, first and foremost, it’s a great – though bittersweet - ode to life as a couple, to sustainable living and - though it might not seem like it at the beginning - to the Netflix generation.

Journey to Utopia (the winner of the Eurimages Co-Production Development Award at the CPH:Forum – read our news) is produced by Danish firm Magic Hour Films APS and Norway’s Mosaikk Film, with the support of the Danish Film Institute and the SorNorsk Film Fund. It can be viewed as part of the Atlàntida Film Fest’s 10th edition, via the Filmin platform, from 27 July to 27 August.

more about: Journey to Utopia

The upcoming projects by Zaida Bergroth, Saara Saarela and first-time director Hanna Bergholm are among the recipients of financial support

"The problem of climate change is a global issue, and no one’s doing anything to solve it" 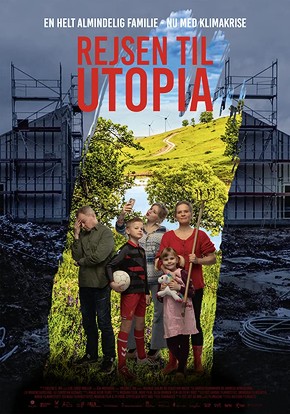