Piotr Adamski’s feature debut, Eastern [+see also:
trailer
film profile] (alluding to the genre of the western while being set in the east), which recently won the Awards for Best Film and Best Direction at the Ischia Film Festival in Italy, is a refreshingly bizarre tale of two families — the Nowaks and the Kowalskis — entangled in a traditional vendetta ritual. When a member of one tribe is killed, they must be avenged, or a huge ransom must be paid to save an otherwise lost life. When a teenage girl (Maja Pankiewicz) is appointed to shoot her peer (Paulina Krzyżańska) from a rival family, she doesn’t want to give in to the old ways, and insists on paving a new one. The stakes are as high as they can get: if the girls break this cycle of ritual murders, they might be able to save their own lives.

The girl’s father (Marcin Czarnik) is already paying the price for his daughter’s reluctance, as the closed community they all inhabit puts more and more restrictions on the family’s daily routine. What makes things more interesting and intriguing is the fact that Eastern is not set in the 19th-century wild steppe of the east, but in modern-day Poland. Both families have elegant and expensive-looking flats, as well as nice cars and an otherwise simple life. Adamski introduces medieval common law to modern society and explores whether it is possible to bring peace between two families, but he does so without the driving force of love that is so central to the feud between Shakespeare’s Capulets and Montagues. Adamski’s film naturally draws comparisons with Yorgos Lanthimos’ Dogtooth [+see also:
film review
trailer
interview: Yorgos Lanthimos
film profile] due to its very conceptual on-screen world, with every element appearing rigid and unwelcoming, and the characters’ faces resembling posthumous masks, never betraying any emotions. Adamski’s oeuvre however is not a copy, but a truly original work, a metaphor of his native country as a hostile place divided into two parts which the recent presidential elections in Poland — won by conservative Andrzej Duda with a small majority — proved to be more than relevant.

Being a visual artist as well, it is natural that Adamski opted for such a conceptual form and focused on creating ideas and images, rather than emotional and psychological undertones. The two lead actresses holding gunsare the film’s shooting stars, sharing wonderful on-screen chemistry and charisma. Their rebellion resonates perfectly with current events in Poland, in terms of feminist protests and a battle for gender equality. Aided by the performance from the mysterious Marcin Czarnik (Son of Saul [+see also:
film review
trailer
Q&A: László Nemes
interview: László Rajk
film profile], Sunset [+see also:
film review
trailer
interview: László Nemes
film profile]), they make up a dream team that would be a gift to any director.

Piotr Adamski co-wrote the script for Eastern with Michał Grochowiak. Jerzy Kapuściński and Ewa Jastrzębska from Studio Munka produced the film along with the Polish branch of Canal+ and the Polish Filmmakers Association. Local distribution of the film is handled by Against Gravity. 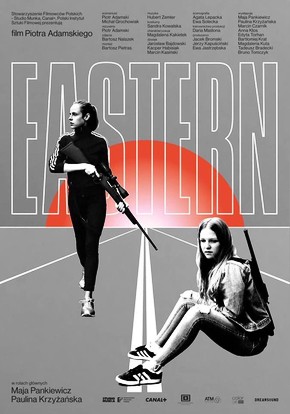 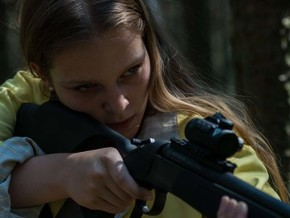