Review: The Island Within

Orkhan Ata and Vidadi Hasanov in The Island Within

The second feature film by Azerbaijani writer-director Ru Hasanov (Chameleon [+see also:
trailer
film profile]), The Island Within [+see also:
trailer
interview: Ru Hasanov
film profile] follows a special character who finds himself in extraordinary circumstances, and then makes them even stranger himself. With elegant, complex cinematography and a strong cast, it is a story of loneliness, abuse in the family, sick ambition, escape and desire for deliverance. The film has just had its world premiere in the Sarajevo Film Festival's feature competition.

Seymour Tahirbekov (Orkhan Ata) is an international chess grandmaster who wins a qualifying tournament in Paris and earns the right to challenge the reigning world champion. Trained and guided by his father Khanlar (Vidadi Hasanov), a man of grim ambition and the air of a KGB official, Seymour returns to Azerbaijan to intensify his practice for the big match, but also to be paraded around corrupt politicians for whom he is merely a tool for self-promotion. He also visits his beloved grandfather Anwar (Rafig Azimov), who tells him about a secret island where he had spent some of the best days of his life.

As pressure from Khanlar and the public mounts, Seymour, who already is a shy, emotionally stunted and repressed young man to begin with, starts buckling under the psychological pressure. After Anwar dies, a dream-like sequence in which Seymour plays chess with a beautiful, naked woman seems to mark a breaking point. He shaves his head, puts on a tracksuit, AC Milan jersey and shades, and travels to the island his grandpa told him about. There, he gets close to the island's only inhabitant, an old and wise farmer, but also gets lost in his own head, his reality becoming fragmented and unreliable. Meanwhile, Khanlar and his powerful friends mount a search...

Opening with a black-and-white home video of a celebration of circumcision, which is instantly followed by Seymour's imaginary DIY ear piercing in the Paris hotel room, the film at first sets up an uncomfortable atmosphere, establishing the overarching theme of an ambitious father-intimidated son relationship within a particularly patriarchal culture.

But not all is doom and gloom: there is some of Corneliu Porumboiu's dryly humorous spirit in the hero's interactions with various side characters. On top of that, the cinematography by DoP and co-editor Orkhan Abbasoff is inviting, dominated by clean colours, including complex set-ups in interiors and beautifully capturing the wild nature of the island exteriors. In nocturnal scenes at the island, the camera reveals, to an extent, Seymour's confused inner world, while keeping his physical surroundings mysterious.

The synth-heavy score by Farhad Farzali and Katya Yonder is sparsely used but remarkably evocative, and works especially well in the film’s epic closing scene, one of the strongest in this year's fiction cinema.

Ata and Vidadi Hasanov make for an excellent tandem, with the latter initially leading the way and the former playing off of him, until their roles reverse and they eventually move into their separate paths, just like their characters do.

The Island Within is a co-production between Azerbaijan's Coyote Cinema, Azerbaijan Film and Debut Film, and France's Arizona Films Productions.

more about: The Island Within

Interview: Ru Hasanov • Director of The Island Within

"Making this film was a long and intimate process, it reflects my relations to my family and my country"

We have interviewed Azerbaijani director Ru Hasanov, who won the award for Best Director at Sarajevo's Feature Competition for his strangely specific The Island Within

For the first time, industry professionals from Azerbaijan and Armenia will take part in the School of Film Advancement workshops, starting with the first online one 18-28 August

Review: The Island Within 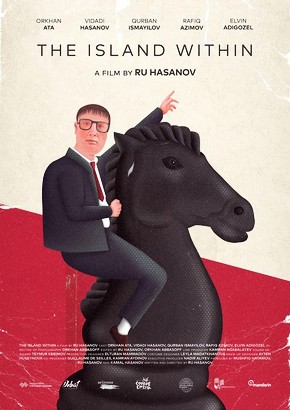