Review: All the Pretty Little Horses

All the Pretty Little Horses [+see also:
trailer
interview: Michalis Konstantatos
film profile], the second feature film by Greek writer-director Michalis Konstantatos (Guerrilla), which just had its world premiere in Competition at the Sarajevo Film Festival, is one of those psychological thrillers that mislead the viewer into expecting a big twist or reveal that never arrives. But in the process, this film uncovers other, more interesting aspects of its protagonists' character traits and their relationship, and makes us try to relate.

After a paranoia-inducing opening, we find the good-looking couple of Aliki (Yota Argyropoulou) and Petros (Dimitris Lalos), both in their late thirties, in a luxurious villa near a seaside town. There being no exposition whatsoever, we only learn gradually that the place belongs to the wealthy Anna (Katerina Didaskalou) who is away most of the time, while Petros taking care of the place and Aliki works part time as an in-home nurse. Their young son Panagiotis also joins them whenever possible, and they seem to enjoy spending most of their time there. When they get back to their apartment, it feels cramped, and irritations and resentments resurface.

Something has happened to them, some kind of an accident or a tragedy that is never fully revealed but which can be deduced to an extent from a few brief lines of dialogue. Whatever it was, they moved out of Athens in order to recover before making their return. Meanwhile, threats seem to lurk behind every corner: a neighbour with two dangerous dogs, a man burning grass in a field by the road, seen from the corner of the eye — often to the menacing score of a very loud, descending string whine. At times, both spouses too display aggressive behaviour, perhaps even homicidal tendencies...

Konstantatos takes his cue from filmmakers like Roman Polanski and Michael Haneke, creating an intense atmosphere and making us question every action of the protagonists. While he certainly doesn't reach the artistic and paranoid heights of Tenant or Caché, his approach is more focused on the heroes' inner worlds, paying off in the way we perceive their relationship.

The isolated modern villa is an excellent, vocative setting: its swimming pool can be interpreted as a place of secrets, or even the subconscious, while its shiny white walls, almost blindingly bright in the soft sun, suggest that nothing can remain hidden for long. Yiannis Fotou's camera often catches details in Aliki's and Petros' body language or facial expressions that add to the mystery. His frequent use of unusual angles, especially high ones, makes us wonder whether one of the two characters is truly being honest with their partner.

While the film appears to achieve most of what the filmmaker apparently set out to do, it would probably be more convincing if some of its aspects were less obscure. As it is, the viewer occasionally feels cheated, which certainly diminishes the film’s overall effect.

All the Pretty Little Horses is a co-production of Greece's Horsefly Productions, Belgium's A Private View and Germany's Massah Film. Berlin-based Pluto Film has the international rights.

more about: All the Pretty Little Horses

Interview: Michalis Konstantatos • Director of All The Pretty Little Horses

"The biggest crimes happen in the light of the day"

We talked to Greek filmmaker Michalis Konstantatos, who screened his feature All The Pretty Little Horses in Competition for the Heart of Sarajevo

Review: All the Pretty Little Horses

New films by Elia Suleiman, Mia Hansen-Løve and Jessica Hausner, among the selection

The 4th edition of the event is being organised as part of the Venice Production Bridge, which will be held from 31 August-5 September during the 74th Venice Film Festival 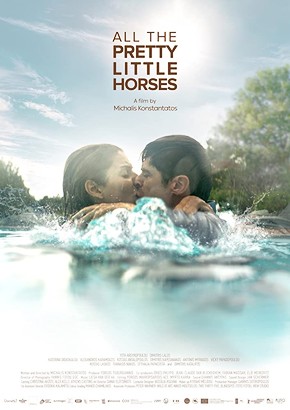