24/08/2020 - Katerina Patroni’s film is a story of people, their losses, regrets and attempts at redemption set on the streets of Athens

The newest feature-length documentary written and directed by Katerina A Patroni, whose previous documentary work includes Men at Sea (2003) and The Third Takis (2008), follows a trio of characters dealing with recent losses and regrets in the urban setting of Athens. It premiered earlier this year on its home turf of Thessaloniki Documentary Festival, winning the Woman in Film and Television GR award. The Fourth Character [+see also:
trailer
interview: Katerina Patroni
film profile]’s international premiere took place at the Sarajevo Film Festival. The film’s universal topic, and Patroni’s humane approach to it, could earn it further festival exposure in upcoming months, before it lands on television.

Mr Pavlos is a 63-year-old man who wants to change his attitude because his restless nature has put him in trouble after trouble. A younger man, also named Pavlos, has decided to dedicate the rest of his life to God and to redeem himself through benefaction. A woman named Tina cannot seem to recover from the death of someone close to her in a motorcycle accident.

Each of these characters has her own special places and daily routine. For Mr Pavlos, it is the bus ride across the city to the park where he feeds the birds; for Pavlos, the side of a busy road he cleans while rhythmically chanting his prayers; and for Tina, the street where the accident happened: she visits it every day and decorates it to commemorate Takis’ death.

The title of the film can be interpreted in two ways. The “fourth character” might be the set of feelings of loss, regrets and guilt these three characters share, together with their desire for redemption and respite. It could also stand for the very city of Athens and its streets, roads, public transportation and parks with which the protagonists spend a lot of time. The cityscape, devoid of the usual tourist attractions and often coloured by grey and rainy skies, reveals its natural beauty and ugliness, and certainly plays a great part in the film itself, and in its characters’ lives.

Wonderfully shot by cinematographer Dimitris Kordelas, who chose a toned-down palette of colours, and edited by Evgenia Papageorgiou to alternate between wide shots and close-ups at a measured pace, leaving plenty of time and space for reflection, The Fourth Character is a highly evocative piece of documentary cinema. The sound design by Persefoni Miliou, focused on the urban murmur and as understated as the colour scheme, also contributes to creating a distinct feeling for the film. The different choices of music, from J.S. Bach’s organ pieces, an acapella Orthodox church and folk melodies on flute (both performed by one of the film’s characters and narrators, Pavlos Tripodakis), to some gentle electronic pulsating, are always fitting and in sync with the characters’ narrations.

The Fourth Character is a Greek production realised by Steficon and the Hellenic Broadcasting Corporation - ERT, with the financial support of the Greek Film Center. Eleni Chandrinou, Maria Kontogianni and Michael Sarantinos served as producers.

more about: The Fourth Character

Katerina Patroni’s film is a story of people, their losses, regrets and attempts at redemption set on the streets of Athens 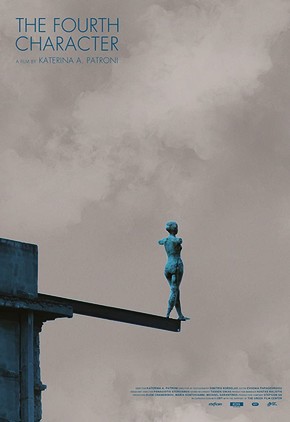