26/08/2020 - Clearly not a fan of black-and-white stories, in her complex film Ilze Burkovska Jacobsen reclaims fifty shades of grey

Already noticed at Annecy and now fresh off Haugesund’s Nordic Focus, Ilze Burkovska Jacobsen’s My Favorite War [+see also:
trailer
interview: Ilze Burkovska Jacobsen
film profile] seems to be well on its way to becoming one of this year’s festival discoveries. Thoughtful, smart and yet incredibly watchable, this “animated documentary” is – along with Mariusz Wilczyński’s recent Kill It and Leave This Town [+see also:
film review
trailer
interview: Mariusz Wilczyński
film profile] – a perfect example of how a deeply personal story can suddenly become very inclusive, even for people who didn’t happen to grow up with the theme song from the Polish series Four Tank-Men and a Dog blasting from every television set in the neighbourhood, or with its actress Pola Raksa’s face – so iconic it has since made it into a generation-defining song.

Jacobsen doesn’t shy away from references that could easily prove too specific, too local, or too subtle to pick up right away. But she handles them well – the narrative doesn’t forgo its identity in order to travel the world more easily, and still remains incredibly easy to follow. As she explores her very own childhood in Latvia during the Soviet occupation (a not-so-merry period in the self-proclaimed “happiest country in the world”), Jacobsen doesn’t look down at the kid who used to have, indeed, a favourite war (World War II, of course, with its useful “us” and “them” divide milked for decades to come), but instead she embraces her observations and imagination. She is especially interested in the moment when, despite all the propaganda, one slowly starts questioning things – not an easy experience, for children or for adults, nor a particularly welcomed one in this grey and resigned world.

Almost completely drained of bright colours, save for red scarves proudly worn by the young pioneers, My Favorite War seems obscured by a heavy, nasty smoke – fittingly perhaps, given how hard it is for the protagonists to breath. With some live-action inserts, its animation never really goes for cuteness, despite all the bows in little girls’ hair, nor for wide-eyed wonder. Stuck with unnerving black pebbles for eyes, these people – created with the help of Norwegian illustrator Svein Nyhus – never quite give away what it is they are thinking, especially not when the remains of German soldiers make their way into the children’s sandbox.

For all the buried stories coming to light, the film is ultimately intimate, focusing on the struggles of one family as much as on the lies and the politics. But Jacobsen, clearly a generous director, also ventures outside of her own head, adding other voices recounting tales that are sometimes sad, sometimes brutal, and sometimes just ending with the whisper that “a stork, it’s a blessing to a house.” Whatever they say, it’s worth listening.

Written and directed by Ilze Burkovska Jacobsen, My Favorite War was produced by Trond Jacobsen and Guntis Trekteris for Bivrost Film & TV and Ego Media, the latter also handling distribution.

more about: My Favorite War

“We were manipulated to love war”

We talked to Ilze Burkovska Jacobsen, the director of My Favorite War, about living in two realities 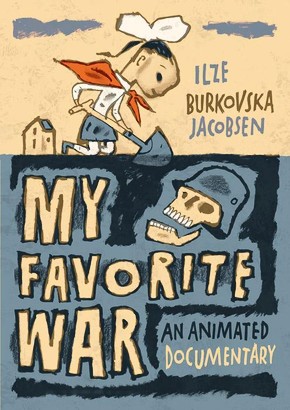 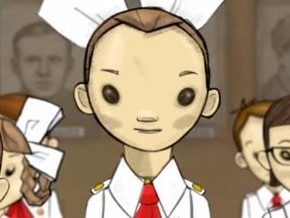