28/08/2020 - In this uplifting documentary, directed by Jaime Murciego and Pablo Iraburu, five indigenous Bolivian women free themselves from the shackles of their daily lives by trying to climb Aconcagua

Milestones – achievements, challenges and even everyday acts –  can change a person’s life forever. Such illustrates Cholitas [+see also:
trailer
film profile], a documentary starring five Bolivian women (Dora Magueño, Lidia Huayllas, Cecilia Llusco, Elena Quispe and Liita Gonzales), shot with admirable technical expertise and directed and written by duo Jaime Murciego and Pablo Iraburu. This week, the film is competing in the 68th edition of the Trento Film Festival, the world’s oldest international film festival dedicated to mountains, adventure and exploration. The festival takes place between 27 August and 2 September: Cholitas will be screened on 27 August and is available to stream for free in Italy.

With fast-paced editing that holds its rhythm throughout, Cholitas begins by introducing its five heroines, five indigenous Bolivian women who have spent their lives in their partners’ shadows. Now has come the time for them to take hold of the reins of their own lives, without having to answer to a man. Thus, dressed in typical highland clothing, they set off for Argentina, where a team of experts awaits, to help them climb the highest mountain in the American continent: Aconcagua.

With a camera that is always attentive to detail, expression and the beauty of the landscape, the directors follow this united team, whose optimism is put to the test by fear, blizzards and danger. On the journey, we see the fascinating contrast between the Cholitas’ attire and the modern and technological environment of shopping centres and aeroplanes. We listen to their dreams and aspirations, understand their love for one another, bear witness to their dances and football matches. We see their faith in an adventure that not only brings them closer to nature, but also portrays them as genuine fighters, capable of enduring the pain brought about by new and extreme situations. This film is a life lesson and prime example of the spirit of achievement.

Cholitas is an Arena Comunicación production, in coproduction with Japan's NHK, with the participation of Movistar+ and with the associate production Mimbre (Chile). National and international distribution is provided by Feel Sales and Freak.

(Translated from Spanish by Jasmine Haniff)

In this uplifting documentary, directed by Jaime Murciego and Pablo Iraburu, five indigenous Bolivian women free themselves from the shackles of their daily lives by trying to climb Aconcagua

The film by Vitaly Mansky has won the Grand Prix in the international competition, while Diego Governatori’s What Madness has trounced the rest of the French selection 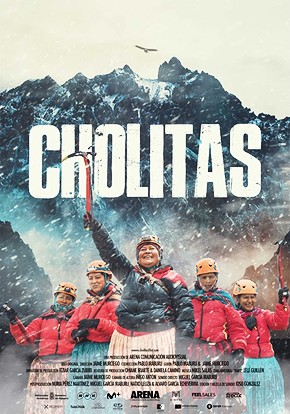