In his debut feature, Undergods [+see also:
trailer
film profile], world-premiering at Canada’s Fantasia Film Festival (20 August-2 September), Chino Moya embraces the concept of bedtime stories and then contorts them completely – hopefully, while also laughing maniacally. It’s an odd universe he has created here, drowning in truly disturbing shades of blue, with two men who have clearly already seen it all and then some (Son of Saul [+see also:
film review
trailer
Q&A: László Nemes
interview: László Rajk
film profile]’s Géza Röhrig and Johann Myers) driving around what’s left of the world and its citizens. As they talk about dreams, Moya comes up with an anthology of sorts: there are tales of greed and a merchant’s daughter, of a mysterious neighbour in need of shelter who just won’t leave, of a husband long believed to be dead. These strands manage to combine the weird with the very mundane, and frankly, it’s the latter that’s truly scary. Especially as at one point, it seems that it’s middle-aged, white men that everyone should stay away from. What a shocker.

There is no denying that Undergods is visually impressive, finding a new way to show the world after the disaster. Where some (fine, George Miller) turn to scorching deserts to go fully post-apocalyptic, Moya prefers chillier weather. And that’s fitting enough, as just about every interaction he shows is just ice-cold, putting Madonna’s unsubstantiated claims that “love doesn’t live here any more” to shame. This time, it wasn’t even given a chance to move in.

Then there is the score (courtesy of Poland’s very own Wojciech Golczewski), embracing everything that a proper synthesiser has to offer – including a certain dose of corniness, granted – but while bouts of over-the-top violence and information that “dead people get goose bumps” find their way in here as well, there is also a lot of hurt. And a raw, soul-baring, drunken karaoke rendition of “My Way”, delivered to the visible annoyance of one’s obnoxious boss.

This combination, also thanks to a very fine cast – with Kate Dickie taking a wide-eyed, devilish form – turns it into something more that just a purely aesthetic experience. Not every story lands or is given enough time to administer a proper punch, that much is true, and some of its plot points feel a tad familiar. But it’s still a very interesting debut, one that among all the craziness – and the terrible teeth – manages to capture daily frustrations and broken relationships, and show something that, given how things are progressing now, could actually happen one day. “I am awake, and I don’t like what I see,” says one of its characters, understandably, as in this scenario, his day is only bound to get worse. But his sentiment won’t be echoed by Moya’s viewers.

Undergods, a UK-Belgian-Estonian-Serbian-Swedish co-production, was written by Chino Moya and produced by Sophie Venner for Z56FILM, Velvet Films, Homeless Bob Production, Media Plus and Filmgate Films. It was made in association with RSA Films, Scott Free Productions and Film i Väst.

After an introduction about the two countries’ main funding options, Estonian and British producers shared their experiences on joint projects, such as Undergods and Sentinel

In his debut feature, Madrid-born Chino Moya turns the synth all the way up to 11 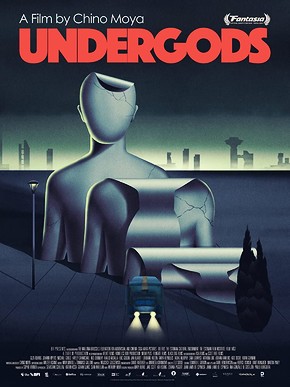