03/09/2020 - VENICE 2020: Kamir Aïnouz opens Giornate degli Autori with her first work about a young woman trying to find her own path, but caught between two cultures

“I’m not just one person, I’m two”: Selma, the beautiful and proud protagonist of Honey Cigar [+see also:
trailer
interview: Kamir Aïnouz
film profile], says it loud and clear at the beginning of the film during an admission interview for a prestigious Paris school. Powerfully portrayed by Zoé Adjani (Isabelle Adjani’s niece), this character of a seventeen-year-old girl of Algerian origin, torn between modernity and tradition, is the beating heart of this incisive first work by French-Algerian director Kamir Aïnouz, sister of the Brazilian-Algerian filmmaker Karim Aïnouz. Opening the 17th edition of Giornate degli Autori at the Venice Film Festival, the movie is an intense coming-of-age tale where the story of a young woman discovering her body and sexual desire conceals a complex web of contradictions resulting from the patriarchal culture she inhabits, all set against the backdrop of the early 1990s’ Algerian Civil War.

Belonging to the learned Berber middle-classes who’ve immigrated to France, Selma’s lawyer father (Lyes Salem) and gynaecologist mother (Amira Casar) instil the importance of studying in their daughter but then, more or less covertly, look to arrange a good marriage for her, organising delicious dinners with family friends and their eligible sons. “What’s the point of studying if what really matters is getting married?” the young woman rightly asks, a question which her mother is unable to respond to, having given up her own career in order to raise her daughter. At school, in the company of her open-minded French friends, Selma shows a side of herself that she’s forced to hide from her parents in the privacy of their comfortable home in the chic Parisian suburb of Neuilly-sur-Seine: the side of a girl who’s sexually uninhibited and in step with the times, who’s free and always has an answer ready for taunts and provocations.

Above all, it’s Selma’s encounter with the attractive Julien (Louis Peres) which acts as a detonator in the young woman’s daily life: she can finally put a face and a name to her desire. Subsequently, she turns her body into a battleground for freedom, deciding what to do with it and when, despite her mother’s continual entreaties not to lose her virginity before she’s married and the angry outbursts of her father who, faced with the umpteenth missed curfew, decides to lock his daughter indoors and distance her from dangerous company. Liberal education collides with sexual coercion, and Aïnouz deftly paints the different worlds that Selma inhabits, alternating political conversations at the dinner table with “forbidden” evenings with Julien, future plans for a brilliant career in finance with her bitter submission (sexual, too, in this instance) to the person who might help bring these plans to fruition, proving that so-called dangerous company is sometimes quite the opposite.

And then there’s Algeria, where the action shifts to at a certain point in the story: the dangerous Kabylia where, at this point in the early 90s, people live their lives under the constant threat of terrorism. But, as Selma’s mother says, “it would be even more dangerous for you if you didn’t go”. United by their desire for emancipation and for self-determination, it’s here that the two women find a new complicity and where the mother, in a significant moment of character development and driven by an urgent need to change things there and then, gets a real opportunity to set a good example for her daughter… Proving that it’s never too late to not depend on anyone.

"A story of a young woman's body torn between two cultures"

VENICE 2020: Kamir Aïnouz opens Giornate degli Autori with her first work about a young woman trying to find her own path, but caught between two cultures 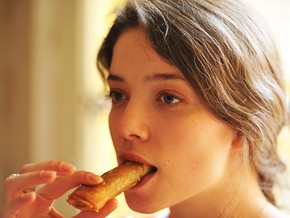