04/09/2020 - VENICE 2020: Relaying the tribulations of an elderly fisherman, brothers Tarzan and Arab Nasser deliver a subtly stripped-back work, painting an ironic picture of the state of play in the Gaza Strip

"I’ve decided to get married", "my future is here". While some dream only of leaving the Gaza Strip, with its daily power cuts, the criticisms exchanged in its corner shops, the relentless haggling for the sake of a few pence, the pay-cuts, the beat-up and monotonous horizon, fisherman Issa - the highly likeable protagonist of Gaza Mon Amour [+see also:
trailer
film profile], by brothers Tarzan and Arab Nasser, which was unveiled in the Orizzonti section of the 77th Venice Film Festival - has other plans.

At 60 years of age, this unobtrusive, elderly bachelor (Salim Daw) - who’s anything but a Don Juan with his routined existence consisting of nights spent alone on his boat and days whiled away in his modest abode, sat on his rocking chair dressed in a vest - is determined to overcome his shyness and declare his love for widow Siham (Hiam Abbass) who helms the neighbouring stall at the market. Will he achieve his goal, despite a very surprising discovery which adds a few complications and draws the Hamas police into the mix? Such is the guiding thread of this brilliant second feature film by the Palestinian directing duo (uncovered at Cannes’ Critics’ Week 2015 via Dégradé [+see also:
film review
trailer
film profile]), a little gem of (seeming) simplicity and intelligence.

The Nasser brothers’ style consists, first and foremost, of allowing time for the humane to emerge while calmly and attentively observing facial expressions, looks, smiles, wanderings, blunders, the sighs of relief accompanying a wee in the open-air or in the sea, the small clashes between a mother and her daughter (those of Siham, a young divorcee) or between a brother and his sister (specifically, Issa, and his sister who, in a very funny scene and wholly uninvited, organises a procession of potential wives and delivers a sales pitch: "he’s kind, polite, gallant, god-fearing"), the little chats which unfold between friends as they get comfy on chairs in the street, etc. It’s an approach which explores the suggestive power of the legacy of silent film and which evokes (in its own individual way) Aki Kaurismäki’s personal touch and, of course, the tutelary figure of Palestinian film Elia Suleiman.

Because, much like these two masters, the little, moving ironies of life (for example, when Issa attempts to establish contact with Siham through the pretext of wanting to get a pair of trousers altered, bought purely and exclusively for this purpose, or when he dithers like a loved-up schoolboy outside the door of his beloved) and the moments in the film which verge on slapstick mask a portrait which is both barbed and tender, divulging the social, economic and psychological aspects of a highly unique land: the Gaza Strip, where Issa’s discovery of a statue of Apollo in his fishing net will soon see him thrown into a cell, accused by the authorities (who veer between arbitrariness and nonchalance) of trafficking in antiquities…

Whilst their quest for subtle simplicity has been a highly sophisticated process achieved over the long-term, Tarzan and Arab Nasser display an innate sense of humour, proving beyond a doubt with Gaza Mon Amour that this really isn’t the last time the world of film will hear of them.

VENICE 2020: Relaying the tribulations of an elderly fisherman, brothers Tarzan and Arab Nasser deliver a subtly stripped-back work, painting an ironic picture of the state of play in the Gaza Strip 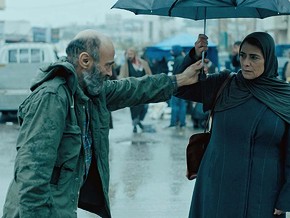