03/09/2020 - VENICE 2020: In his second feature, Serbian director Ivan Ikić revisits his approach from Barbarians but this time goes for a much more challenging milieu

Serbian filmmaker Ivan Ikić came onto the international scene when his first feature, Barbarians [+see also:
film review
trailer
interview: Ivan Ikic
film profile], premiered in Karlovy Vary's East of the West in 2014 and won a Special Mention. The film was a naturalistic look at Serbia's football hooligans, with non-professionals playing characters similar to their own. Now, with Oasis [+see also:
trailer
interview: Ivan Ikic
film profile], which has just world-premiered in the Venice Film Festival's Giornate degli Autori, Ikić takes the same approach in a much more challenging milieu: an institution for young people with special needs.

Split into three chapters, each named after one of the three key characters, the film opens with a newsreel-style report about the institution in question being set up outside Belgrade in 1969. As it segues into the first chapter, entitled “Marija”, we see the eponymous teenage girl (played by Marijana Novakov) arrive at the asylum in the company of caretaker Vera (Slovenian actress Maruša Majer). She becomes fast friends with another girl, Dragana (Tijana Marković), and soon gets close to Robert (Valentino Zenuni), a quiet guy who helps out in the kitchen. He never says a word, and while we could hardly call him the strong, silent type, the boy glides through the institution with the ease of a Buddhist monk and seems to possess a personality that is magnetic to the two girls.

A strange love triangle has formed, and we move into Dragana's chapter after her jealous and very physical attack on the newcomer. Romance is drama for these young people, and their fatalistic understanding of it turns every conflict into a matter of love or death. Pregnancies, whether real or imagined, as well as violence and self-harm, play a big role in such an environment, and the three make a suicide pact because the institution will not allow them (or any two of them) to be together. By the time we get to Robert's chapter, where we also get acquainted with the caretaker in the boys' pavilion, played by Croatian actor Goran Bogdan, the situation escalates well beyond the simple teenage melodrama.

Ikić's film is based on a strong concept, in lieu of real actors who would be able to portray all of the emotional nuances. Instead, as far as storytelling goes, he uses ellipses and counts on the viewer to fill in the blanks. There is only one, key scene in which all three of them have a substantial acting task, and it is executed marvellously, with Ikić relying on Miloš Jaćimović’s shadowy lighting and naturalistic camerawork.

But naturalistic in no way means simple. In the first chapter, the camera and sound are subjective and place Marija in the lead role, guiding the viewer into the challenging narrative. In the second, the viewer feels as if they were a person always following or talking to Dragana, while in the third chapter, the approach is as objective as it gets, as we see Robert from the angle of the two caretakers. It represents society's point of view, and it's not pretty.

Ikić, however, stays away from big statements, just like he did in Barbarians. It's not hard to imagine that, in Serbia, not much has changed for this population in 50 years, and the director limits his point to almost imperceptibly segueing from the opening newsreel into the film's story. Instead, he focuses on the lives of the protagonists in their particular surroundings. Every shot is rich in eye-catching details, with other users of the institution providing a background that is both dynamic and atmospheric. The setting is a character in itself: an invisible authority with little interest for its subjects.

"My challenge was to make people with mental disabilities play fictional roles, not themselves"

VENICE 2020: Serbia's Ivan Ikić presents his second feature Oasis, which tells the story of a love triangle within the walls of an institution for young people with special needs

A double win for Pleasure at Slovakia’s Art Film Fest

The Croatian-Serbian co-production is an unconventional hybrid of thriller and drama with elements of absurd humour, co-directed by first-timers Andrija Mardešić and David Kapac 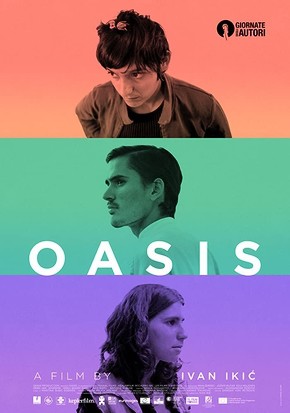