04/09/2020 - VENICE 2020: The first work by producer and documentarian Carlo Hintermann, collaborated upon by Terrence Malick, packs a highly gratifying visual punch but its story becomes lost in esoteric themes

While audiences the world over get their heads around the complex time travels in Tenet [+see also:
trailer
film profile], there’s an independent Italian-British-Belgian film which has opened International Film Critics’ Week in Venice, and which uses the classic interaction between the past and the present in both a romantic and a supernatural key. The first work of fiction directed by the Italian-Swiss producer and documentary-maker Carlo Hintermann, The Book of Vision [+see also:
trailer
interview: Carlo S Hintermann
film profile] comes with a prestigious guarantee: Terrence Malick is its executive producer. We don’t know the degree to which the iconic US director contributed to the work, but echoes of his films are felt throughout the entire movie.

The story unfolds across two separate time periods: the present day and the 18th century - an era of social, political, technological and scientific revolutions. In a continual toing and froing in time, the film follows in the footsteps of its protagonist Eva (Dutch actress Lotte Verbeek, known for her role in the series Borgia), a young and brilliant oncological surgeon who has dropped everything to study the history of medicine at a small university. She seems especially obsessed with the writings of Johan Anmuth (the ever-impassive British actor Charles Dance, Game of Thrones), a doctor who lived in Prussia in the 18th century. A short prologue shows us a ghostly child separated from his mother by some sort of temporal wall, and in the successive jumps backwards in time to 1729 we realise that the lead actors are effectively impersonating characters from the past and present (a bit like in the Wachowski sisters’ Cloud Atlas): Dance is also the doctor who looks after Eva through her illness and pregnancy, Lotte Verbeek herself is also the noblewoman Elizabeth von Ouerbach who has hired Johan Anmuth as her own personal doctor and mentor, Swedish actor Sverrir Gudnason (wonderful in Borg/McEnroe [+see also:
film review
trailer
film profile]) is Eva’s faculty advisor at the university but also the young doctor Nils Lindgren, whose innovative techniques see him clashing with the elderly Anmuth.

The truth is that Lindring is a forerunner of applied biotechnologies, while old Anmuth is nothing more than a Freud prototype (Sigmund was born a century later), a doctor who would rather listen to his patients stories, analyse them and interpret their dreams in order to uncover and cure illnesses. But Eva comes into possession of one of his manuscripts (the titular book of dreams) which contains the hopes and fears of over 1,800 patients, and these stories of the living and the dead will become a single spiritual river which influences Eva’s very existence.

The slow flashbacks into a form of nature that is silent but also bursting with symbolic and transcendental signs are reminiscent of Malick’s ancestral and animistic visual style (Hintermann was second unit director on the Italian filmset of Tree of Life). It’s a type of nature which, in this film, envelops and protects the dead, and a backdrop which echoes the vegetal and aquatic performances of Ana Mendieta, and the body art produced by Donna Huanca and her peers. The non-visual digital effects entrusted to LRNZ, the camera movements and the cinematography of Jörg Widmer (who was a cameraman for Wenders, Tarantino, Haneke, Polanski and Bela Tarr) all transform this semi-period drama film into a work that’s highly gratifying both for the eyes and the brain. The screenplay, however, written by Hintermann and Marco Saura, takes on too many Malickian themes – the female universe, the body, the synthesis between the past and the present, and so much more – and ultimately loses its way in various redundant explorations, mystical complications and over-explanatory dialogue. But the magnificent closing credits are definitely not to be missed.

The film is produced by Citrullo International, Belgian group Entre Chien Et Loup and British firm Luminous Arts Productions together with RAI Cinema. International sales are in the hands of Celluloid Dreams.

more about: The Book of Vision 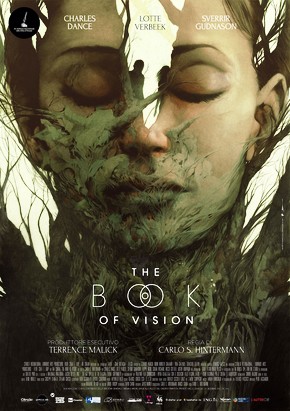 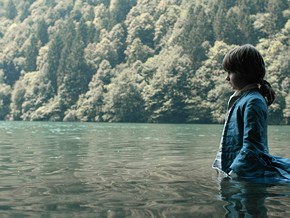