05/09/2020 - VENICE 2020: Luke Holland spent the decade before his own death capturing testimonies from Germans and Austrians who lived through the Third Reich

The documentary Final Account [+see also:
trailer
film profile], featuring reminiscences about Nazi Germany from those who witnessed the rise and fall of Adolf Hitler, took over a decade to make. An inter-title informs us that British filmmaker Luke Holland, whose work includes the five-part BBC Storyville series, A Very English Village, I Was a Slave Labourer and Good Morning Mr Hitler, began conducting interviews for the film in 2008. Unfortunately, the remarkable documentary filmmaker and photographer, who also played one of the leads in the Amos Gitai feature Eden, died on 10 June after a battle with cancer. At the time, he had already completed the movie and knew that it would be premiering Out of Competition at the Venice Film Festival.

Holland captured over 250 interviews with octogenarian and nonagenarian Austrians and Germans. There are men and women from all walks of life, some of whom became SS members, Wehrmacht fighters, concentration-camp guards or silent civilian witnesses. Initially, the documentary is compartmentalised into sections that detail important events such as Kristallnacht. It's a litany of how Nazis ostracised Jewish citizens during the Third Reich.

Talking heads, filmed in their houses, give their version of events, and Holland is careful to show how they live now. He doesn't point it out explicitly, yet there is a juxtaposition between how some who were part of the Third Reich were able to move on from their involvement, and those who were killed during the Holocaust. Is that right? It's a thorny question, and Holland highlights a myriad of responses. As the interviewees start talking, their words are accompanied by archive footage and photographs containing signposts banning Jewish people. It's a chilling context. However, Final Account is not as powerful as it should be, because there is something prosaic about the method. From a formal and narrative standpoint, the documentary lacks thrust. Perhaps that's inevitable, given that Holland is trying to be factual.

Another thorny issue is more subjective. What is the social utility of doing these interviews, now? Especially with those interviewees who seem to be struggling with their words or memory. It's a question that Holland tackles in the final act of the film, where questions of remorse and guilt are raised more directly. One interviewee believes the Nazi Party could have succeeded if it had chosen to move Jewish citizens to other countries, rather than murdering them. It's a horrifying perspective. By choosing bank clerks and regular members of the workforce, Holland shows how people can be swept up in events and be a part of something even when they are blissfully unaware of the ramifications. Does this make them innocent? It's a big question.

In the final act, he goes further and demonstrates how the cancer of racial hate still lingers in the present day and has been absorbed by other generations, who are now regurgitating the message. It's why reminders of history are constantly needed, especially for new generations. The best scene sees Holland drop the talking-heads format and show young people with blanked-out faces asking questions of a former Nazi around an office table. The outcome of the meeting is unexpected.

Final Account is a Participant presentation of a Zef Productions and Passion Pictures (both UK outfits) production. Cinephil, Submarine Entertainment and Participant manage its international sales.

VENICE 2020: Luke Holland spent the decade before his own death capturing testimonies from Germans and Austrians who lived through the Third Reich 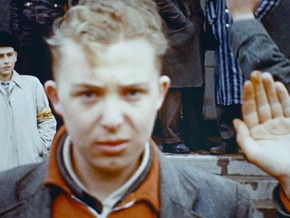