Jim Broadbent in The Duke

Clearly brought to Italy to brighten up the Venice Film Festival’s Out of Competition section, Roger Michell’s The Duke is easy, breezy fun. Well, at least it’s almost there. Inspired by the odd, true story of a man who made the headlines in 1961 after Goya’s painting of the Duke of Wellington was stolen from the National Gallery in London, it has Jim Broadbent continuing his life’s mission of playing the nicest people imaginable. This time, he is cast as Kempton Bunton: a sometime taxi driver who talks way too much, a wannabe playwright and a passionate activist before anyone has ever heard of such a term. Not that his wife Dorothy (Helen Mirren, as grumpy as it gets) would agree, tired of his never-ending crusades. Once Kempton gets into much, much bigger trouble than just refusing to pay his TV licence – an offence punished with 13 days of prison – she seems to be reaching her limit.

Short and scored to cheerful tunes, The Duke is yet another of the oh-so-very-British dramedies that have been landing in cinemas all over Europe for a while now – those ones that revel in their retro setting, reliable cast that have already been tried and tested, and a generally cheery view on humanity and life – even when it brings pain. “How do you eat elephants? One bite at a time,” goes the saying here, fittingly for a story about an ordinary man determined to fight for what he considers right. One bite at a time, indeed.

Without spoiling too much of the bonkers plot, as that would most likely see you locked up for 13 days, too, The Duke is, first and foremost, an underdog story, of someone who, despite pretty much constant rejection, even at home sweet home (“My wife – she always supports me in private,” he deadpans), just keeps on going. It takes an actor of Broadbent’s effortless likeability to make something out of this role, which could easily read like the Unbreakable Kempton Bunton. That and having Mirren rain on every one of his parades, obviously.

Worth seeing just for the banter between its two game leads, The Duke ultimately disappoints a bit, perhaps because it seems to be pushing all of these familiar buttons a tad too well, taking what has worked in the past and presenting it once again. Arguably, it’s a formula that works, as this one is bound to generate laughs long after Venice wraps up. But while, later on, someone might still remember Bunton and that Dr. No gag, the rest of the film is bound to get hazy.

more about: The Duke

Filmmakers Ferit Karahan, Ivana Marinić Kragić and Vitaly Akimov are among the other winners

VENICE 2020: Roger Michell provides a crowd-pleaser that nevertheless tries to please a bit too hard 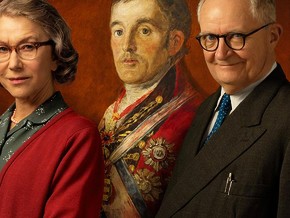