07/09/2020 - VENICE 2020: In his new hybrid film, Swiss artist Milo Rau revisits the story and meaning of the Passion of the Christ in a powerful, modern setting

Swiss filmmaker and multi-hyphenate artist Milo Rau, best known in the festival world for his 2017 documentary The Congo Tribunal [+see also:
trailer
film profile], has brought his new and ambitious hybrid film The New Gospel [+see also:
interview: Milo Rau
film profile] to Venice's Giornate degli Autori. Set and filmed in and around the Italian city of Matera, it is a bold if uneven, modern retelling of the Passion of the Christ with a powerful social angle.

Matera is known as the cinematic Jerusalem thanks to the fact that both Pasolini and Mel Gibson used it as a backdrop for their films about Christ. Taking as a starting point the by now well-established question of what Jesus, himself a member of an oppressed nation from the Middle East, would do in the age of the refugee crisis, exploitation and modern slavery, it finds a perfect match in the city that is now, like most places in Southern Italy, struggling with an influx of immigrants and the way local authorities treat them.

Rau's closest collaborator is Yvan Sagnet, an author and political activist from Cameroon who started the first immigrant workers’ strike in Italy, in 2011, when he was labouring in the tomato fields of Nardò. Sagnet stars as Jesus in the Passion Play set up by Rau and is also the leader of the movement "Resistance of Dignity," a loose group of immigrants and refugees who are fighting for their basic human rights and against the exploitation and discrimination that Italy's political system has subjected them to.

These two main strands unfold in parallel and overlap in Rau's film. The fertile, potent mix works very well in scenes of the Passion Play: Jesus and most of his apostles are black, and also Muslim, and the enviable size of the production allows for strong, supporting players, such as Pasolini's Jesus Enrique Irazoqui or Gibson's Saint Mary Maia Morgenstern.On the other hand, scenes of protests are expectedly chaotic, except when the charismatic Sagnet has the microphone and anchors the demonstrations in the same way that he holds the spectator’s attention as Jesus in the play.

However, the most powerful effect happens when the two strands join. Images of strong, proud, black faces in biblical costumes, led by Sagnet, climbing up the ancient stairs leading to Matera's old town, carrying an amplifier and chanting, "Resistance is Dignity!" while tourists look on, are some of the strongest in documentary cinema this year, because the contextual dissonance is so jarring and yet so fitting. This is just one of the aspects that make the subtext so vastly rich, inspiring a variety of associations and interpretations in the viewer.

There are numerous layers beneath the surface story, which is pretty complex in itself. The refugees are demanding basic respect and humane treatment at the same time as they are preparing the biblical play, for which the mayor of Matera joins them in the role of Simon of Cyrene. The politician's talk and, indeed, walk, as he carries the cross, feels energetically affirmative, but on the other hand, does he not have any influence on the real economic forces that exploit the workers/actors? Or is he just using this opportunity to get the most out of the year in which his town is a European Capital of Culture?

Although the execution of individual parts of the film is sometimes clunky, and we sometimes get the impression that the artist has bitten off more than he can chew, the sheer force of the combination of topics, imagery and music (including the same Mozart, Bach and Pergolesi pieces used in Pasolini's film) makes the film a vibrant and exciting watch.

The New Gospel is a co-production between Germany's Fruitmarket, Switzerland's Langfilm and Rau's own company, International Institute for Political Murder (based in both countries).

more about: The New Gospel

"The first black Jesus film in the European film history"

VENICE 2020: With The New Gospel, Swiss director Milo Rau adapts the Bible to the present day, depicting immigrants reduced to slave labour, and the fight for their rights

Milo Rau adapts his own play, about a typical middle-class family whose every member has decided to end their life

Running 12 to 21 March, the 43rd edition of the festival will take online form, offering up an abundant programme including an international competition screening 21 titles 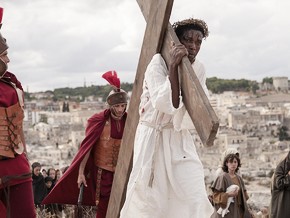