Men are wolves for women, except when the woman calls upon the power of the wolf … Hunted begins with a fireside story, a frightening story; an original folk tale which sets out the stakes at play in the present as well as an outline of what’s to come…

Fast-forward a few minutes and we find Eve propped up on a nightclub bar. A dancing man, a boor, a rescue and a few drinks later, she finds herself in the company of her seductive dancer on the backseat of a car. But the atmosphere in the vehicle changes abruptly upon the sound of the doors locking. Eve is trapped and a long night lies ahead of her in the thick of a deep, dark forest…

A post-modern variation on the tale of Little Red Riding Hood, Vincent Paronnaud’s Hunted (screened this week at the Brussels International Film Festival, following its unveiling at the Canadian Fantasia Film Festival, which unspooled online) has the flavour of a cruel and primitive story, the timeless, universal tale of predatory man whose main prey is desperate women. But Eve’s doe eyes (those of Lucie Debay) soon give off a worrying look. Initially lost in the forest, Eve then finds refuge in it, refuge of both a physical and existential form. She begins by fleeing, powered by her survival instinct. But little by little, surviving is no longer enough for her. She decides to live, and not just a little bit. A wild child, Eve will fight, empowered by the strength of the trees and the forest.

Opposite her, as The Man, we find Arieh Worthalter, who changes from a gentleman to a scoundrel with disconcerting ease. He takes a hold of this key cinematic figure, the psychopathic killer, inhabiting the role with intensity and facility. Cruelty, a sarcastic curl of lip, demented laughter… he delivers all this and more, right up to the primal scream, a scream which he shares with Eve in a merciless narrative twist which sees the hunter become the hunted.

The wonderful images offered up by Belgian director of photography Joachim Philippe – images of both the night and the daytime in this cruel, fairy tale forest - plunge the viewer into the story alongside the protagonists, but also alongside the impressive bestiary which haunts the film, highlighting the animality of these human beings who are fighting for their survival. Special mention should also be made of the red and blue hues which punctuate the tale and bring to mind the filmmaker’s first loves as a comic book author (Pinocchio, Best Album award at the prestigious Angoulême International Comic Books Festival) and animated films director (he co-directed Persepolis [+see also:
film review
trailer
interview: Marc-Antoine Robert
interview: Marjane Satrapi, Vincent Pa…
film profile] and Chicken With Plums [+see also:
trailer
film profile] in league with Marjane Satrapi); a filmmaker who, in this instance, is launching himself gleefully into live-action, revelling in this particular genre form and manhandling and augmenting its codes.

Hunted proves to be an unexpected treasure chest, which is no less potent for its two main actors - two safe bets in the Belgian film landscape. Debay quite literally transforms in this film, becoming a woman of the woods slowly overcome by rage and fury. Worthalter is impressive for the ease with which he embodies an authentic, incandescent movie villain, the kind whose deranged look will end up haunting our sleepless nights. In short, two highly attuned performances in a genre where we wouldn’t necessarily expect them.

Produced by Belgium’s Wrong Men and French group Kidam, and co-produced in Ireland by Savage Productions, the film is sold worldwide by Charades, with American rights already in the hands of Shudder (AMC Network).

The Walloon regional investment fund is granting €1,410,000 to six features, a fiction series and an animated series aimed at young audiences 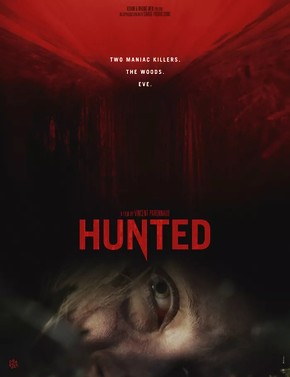