14/09/2020 - VENICE 2020: Adilkhan Yerzhanov's new feature is a title rich in absurdity, and is both entertaining and disorientating in equal measure

The story is set in a fairly classical place “in the middle of nowhere” – namely, the rugged Kazakh Steppe. We follow the misfortunes of an ex-convict, called Kermek (played by Azamat Nigmanov), a bizarre man wearing a yellow aloha shirt and a fedora. Kermek wishes to find a job, but the local police officer, Bozoy, decides to recruit him to commit crimes for his gang of small-time crooks. Kermek, however, is a clumsy, goofy individual who is a big fan of Jean-Pierre Melville's Le Samouraï (1967) – perhaps the only film he has ever watched, and not even in its entirety – and has a grand, unusual dream: to open a movie theatre somewhere in that “middle of nowhere”, more precisely on a plot of land owned by his uncle. Following a surreal confrontation with Bozoy and after stealing some money from a local gangster, he ends up fleeing with a dazed, red-haired prostitute called Eva (Kamila Nugmanova). The whole movie, structured as seven chapters, each introduced by a childish drawing, is rich in absurdity and instils in the viewer a peculiar – but by no means novel – feeling of watching something entertaining yet disorientating. The most obvious film references for said feeling may be the Coen brothers or David Lynch – in particular, Yerzhanov's piece may be loosely considered a more childish, slow-paced, Central Asian version of Lynch's Wild at Heart (1990). The two titles have several things in common, such as the black-comedy genre, a weird community surrounding the couple, some clunky action sequences, a scarcely populated landscape and the two lead characters being chased for most of the narrative.

Kermek and Eva are funny to watch, naive and incredibly cartoonish. From its very beginning, the film adopts slow-paced action and editing to emphasise the absurdity of the situations, and uses slapstick as a comedic device. While the movie's tendency to crawl along works rather effectively for most of the piece, in some sequences – mainly placed in the second half – the tension starts to be noticeably absent. Throughout the chase, however, there's still room for tenderness and sweetness; there are a few moments of “childish” – but pleasant and genuine – intimacy between the two characters, be it when they are chasing each other among the trees in a beautifully crafted long shot or when Kermek is mumbling and dancing to Singin' in the Rain in front of a rudimentary (and not even functional) cinema screen purely for Eva's entertainment.

The resolution of the conflict is brutal and unexpected. It somehow highlights the dichotomy between the community of “stupid, greedy adults” – who spend their time doing nothing or doing something useless – and the two protagonists, who dream big and are seeking freedom. Furthermore, it constitutes a powerful metaphor that makes up for the imperfections of a brave piece, which is difficult to categorise.

Adilkhan Yerzhanov’s latest feature once again boasts a cast split between white clowns and augustes, but the result is far less effective than that achieved in Yellow Cat

After one cancelled edition and another postponed, the FIFF is making its return with 139 films hailing from 51 countries

VENICE 2020: Adilkhan Yerzhanov's new feature is a title rich in absurdity, and is both entertaining and disorientating in equal measure 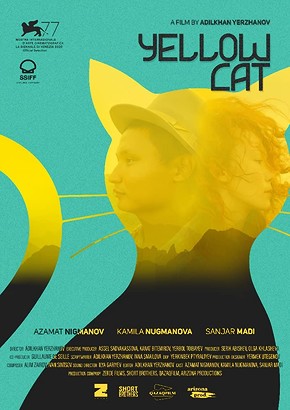