17/09/2020 - Dieudo Hamadi follows skilfully and respectfully in the footsteps of a group of survivors devastated by war and demanding reparations, in a documentary awarded the Cannes 2020 Official Selection Label

"We demand our blood money. We’ve been killed for nothing. What have we done to deserve this?", "we’ve been hesitating for too long, we need to act now. It will be a long and painful journey. But we won’t achieve anything without sacrifice.". Shown in a Special Screening at the 45th Toronto Film Festival after being awarded the Official Selection Label of the 73rd Cannes Film Festival, Dieudo Hamadi’s new documentary Downstream to Kinshasa [+see also:
trailer
film profile] shines a light on a forgotten tragedy and on the touching bravery of a group of war invalids embarking on a journey towards the Democratic Republic of the Congo’s capital so as to make heard their voices and their right to dignity and compensation. It’s an odyssey of David-and-Goliath-style dimensions which is full of humanity and which the filmmaker renders perfectly by establishing an apposite distance from his characters (without ever evading the visually brutal nature of their disabilities nor using them as leverage for melodramatic effect) and by crafting a work which is very elaborate for all its seeming simplicity.

"6,600 bombs fell on us. The Red Cross buried the bodies until they no longer knew what to do with them. The dogs finished off the job". Between the 5th and 10th June in the year 2000, the Ugandan and Rwandan armies came head to head in the Congolese town Kisangani. The result? Thousands of its inhabitants were killed or injured. Nineteen years later, the physical stigmata of the event are the everyday cross borne by the members of a local association which brings together maimed people, double amputees and one-armed men, all facing a lifetime of crutches and prosthetics and a feeling of social uselessness that’s reinforced by their loved ones. But they’re also animated by a thirst for reparations, since the International Court of Justice ordered Uganda to compensate the town of Kisangani up to the value of 10 billion dollars (of which 1 billion dollars for victims and survivors). But 18 years later, the claim file is still “under examination” in the Congolese capital.

"It’s time for the charade to stop". Consequently, our (anti)heroes decide to board a boat and journey over 1,700 kilometres along the Congo River in order to reach Kinshasa and plead their case in person. A dozen women and men, heavily disabled, wielding very limited funds but armed with an extraordinary fighting spirit, launch themselves into this adventure…

Nestled very close, empathically speaking, to his endearing characters, while maintaining an intimate yet respectful distance, Dieudo Hamadi accompanies them through the many twists and turns of their quest, which has an air of the naive about it, but which also speaks of tenacity, poignancy, optimism and resilience. From the dangers they face in their journey downstream to their being denied entry at the National Assembly and the local UN representation, the filmmaker - who shot the work (very well) himself via a variety of sources (mobile phone, drone, etc.) – holds up a mirror to this tiny glimmer of hope in the deepest, darkest dark. It’s a symbolism of which he also very wisely avails himself in his inclusion of several striking scenes from the disabled people’s theatre workshop, in the same way that he grants a real role to the songs and monotonous chants which punctuate daily life across the African continent, and which play a key part in conveying Hamadi’s humanist message. It’s a desire for justice which, bolstered by the film’s Cannes selection, already seems to be bearing fruit: on 7 September, the Congolese government pledged 1.5 million dollars to the victims of the various wars inflicted upon Kisangani, most importantly the Six-Day conflict…

more about: Downstream to Kinshasa

Dieudo Hamadi follows skilfully and respectfully in the footsteps of a group of survivors devastated by war and demanding reparations, in a documentary awarded the Cannes 2020 Official Selection Label 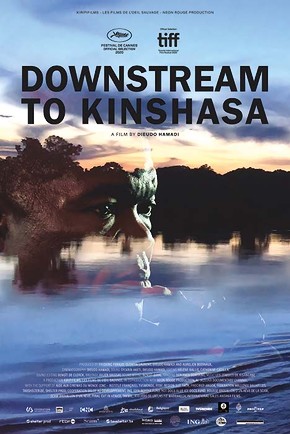 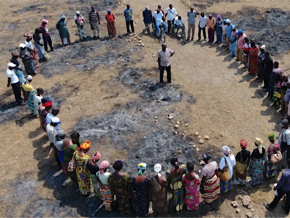