SAN SEBASTIÁN 2020 Out of Competition

18/09/2020 - Woody Allen heads to San Sebastián, bringing with him his passion for travel, his neuroses and his love of (classic) film - a fantastical escape route which saves him from personal catastrophes

San Sebastián, how beautiful you are! All those who journey to the city fall desperately in love: with its beaches, its old streets, its atmosphere, its gastronomy and its people... And Woody Allen is no exception. Already enchanted by Paris, Rome, London and Barcelona, among the various other places to be immortalised in his recent picture-postcard films, why wouldn’t he continue his tour in this oh so photogenic, cinephile enclave? Indeed, the director relocated to the Basque city this summer, together with Vittorio Storaro, who makes ample use of the local golden sheen, to shoot Rifkin’s Festival [+see also:
trailer
film profile], which – unsurprisingly, given the support it has received from the event itself as well as local institutions during filming – is the title set to open the 68th edition of the San Sebastián Film Festival.

And it’s precisely during the celebration of this cinematic event that the film unfolds, and where its protagonist, the titular Rifkin (played by New Yorker Wallace Shawn), arrives with his wife (Gina Gershon) who’s a press officer working for a promising, modern French filmmaker (Louis Garrel). While she is (overly)  busy with her work (and her young protégé), he wanders around San Sebastián until - thanks to his persistent hypochondria - he makes the acquaintance of a local doctor (Elena Anaya). All the makings of a romantic comedy are served, sentimental entanglements – and visits to the city’s most characteristic corners – included.

But Allen’s satire – suffused with a level of light-heartedness which his early fans feel is missing in his latest works –doesn’t take the subject of Rifkin’s Festival too seriously. He ridicules the festival scene, mocks modern authors as pretentious revolutionaries of the seventh art and states the case for the classic form of cinema which he loves so much, European films in particular. It’s here that his “celluloid dreams” come onto the scene, which star Rifkin himself as their protagonist (clearly Allen’s double, just like the character played by Mia Farrow in The Purple Rose of Cairo) and which are recognisable recreations of films by François Truffaut, Federico Fellini, Ingmar Bergman, Jean-Luc Godard and Luis Buñuel, to name a few.

Exuding an aura of nostalgia, Rifkin’s Festival isn’t a movie about the San Sebastián Film Festival, but about the festival that each of us can create in our minds using memories of our own favourite films; works which - as happens to the protagonist of this cheerful and forgettable comedy - help us to move onwards through our meaningless existences, full of setbacks, betrayals, snobbery, lies and unfulfilled expectations: the perfect material for a chat on the therapist’s couch. And a fitting addition to the Woody Allen franchise. Enjoy your trip!

Rifkin’s Festival is a production by Spanish firm The Mediapro Studio, North America’s Gravier Productions and Italian outfit Wildside. The film will be released in Spain via TriPictures on 2 October.

Woody Allen heads to San Sebastián, bringing with him his passion for travel, his neuroses and his love of (classic) film - a fantastical escape route which saves him from personal catastrophes

Allen’s latest, Rifkin’s Festival, which was shot a year ago in the capital of the Basque Country, and is toplined by Elena Anaya and Louis Garrel, will have the honour of opening the gathering

The new film by the veteran US director, starring Gina Gershon, Wallace Shawn, Elena Anaya, Louis Garrel, Sergi López and Christoph Waltz and set in Spain, will be released internationally in 2020 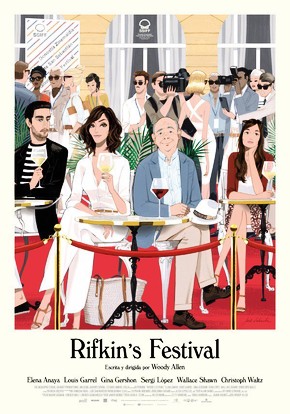