24/09/2020 - In his first documentary, Antonio Méndez Esparza keeps exposing the realities of life in the United States, this time from a Florida family court — where emotions are always running high

It’s the kind of film that might seem a little dry to viewers hoping for a lively soundtrack, polished visuals and jaw-dropping effects; you’ll find nothing of that nature here. In the first half, Méndez Esparza uses a static camera to give us an inside view of various cases and applications. Never leaving the room, we watch from a respectful distance as a motley selection of broken families pass through the court: parents desperate to get their children back and others who are placing theirs in care. At times, the subject matter can be painfully harsh.

In the second half we observe two trials, the camera’s steady gaze finally relenting to allow for a few close-ups (the gestures, the looks, the silences...) bringing on a gathering tide of emotion than never subsides. Meanwhile, the distinct personalities on either side of the bench begin to take a more central role: the conciliatory, empathetic and courteous judge and the fierce, emotionally invested lawyers and prosecutors flailing against verdicts that seem hard to accept.

Herein lies Courtroom 3H’s most remarkable achievement: by transforming each viewer into a judge, we too begin to adjudicate (consciously or otherwise) on the lives of those who traipse through the court, as it carries out its duty to decide the fate of children and young adults. Reaching a verdict is far from simple.

This complexity, which envelopes the legal system in general and our modern global society (where immigrants and new, unconventional kinds of families have become more prominent) is another aspect that Méndez is keen to underline. His work has always been sensitive and sympathetic to the lives of the least privileged, and so this foray into the documentary form is not the volte-face it may first appear. After all, in the words of James Baldwin that open the film: ‘If one really wishes to know how justice is administered in a country... one goes to the unprotected... and listens to their testimony.’

Courtroom 3H was produced by Spain’s Aquí y Allí Films in partnership with US company 9am Media Lab, with sales overseen by Feel Sales. It is scheduled for release in Spain this Friday, 25 September, distributed by Wanda Visión.

“When I find myself in a situation I didn’t expect, I try to embrace it.”

In his first documentary, Antonio Méndez Esparza keeps exposing the realities of life in the United States, this time from a Florida family court — where emotions are always running high

The first non-fiction film by the director of Life and Nothing More is once again being produced by Aquí y Allí Films, like his previous works 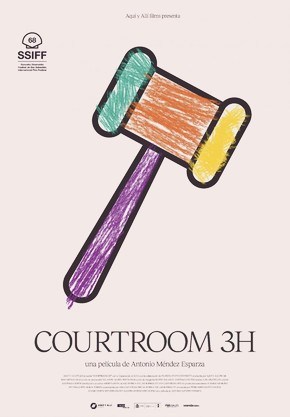